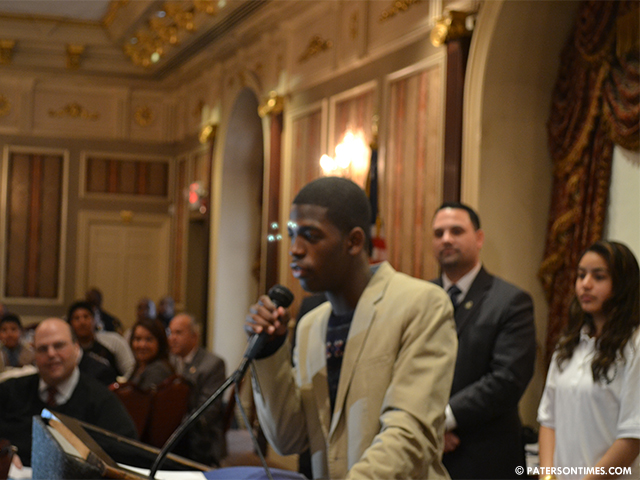 Four city youths from middle and high schools, one adult, and one organization were each recognized for achievement and given awards during a ceremony at the Brownstone on Monday morning titled the Martin Luther King, Jr. Youth Recognition Awards.

Middle school students: Dymond Robinson, a pupil at the Norman S. Weir Elementary School, and Amonte Simmons (pictured), a student of School Seven, were recognized for being high achieving youths, by the Paterson Youth Council, a group of community minded youths organized by the New Jersey Community Development Corporation which runs a charter school on Spruce Street.

Simmons, who was sitting at the same table with Nick Vancheri, his school’s principal, and Tracy Pearson, his basketball coach, seemed excited about the award and fond of hearing his coach and principal’s unfiltered praise. “He’s been a straight A student for four years,” said Vancheri about the captain of the basketball team. The principal stated that awards like these help his school receive some exposure, which due to its location, hidden inside the city’s Stoney Road section, seldom receives.

High school students: Mara Kettle, a pupil of John F. Kennedy High School, and Frankcarlos Castro, another Kennedy student, were recognized for their achievement. Castro shared a story of him being enrolled into a three week summer program at the Princeton University, where his parents dropped him off whenever he was required to be present at the campus.

“We must make and create our own future and no one is more important than you,” said Bill Pascrell, Jr., congressman representing the State’s 9th District, to a large crowd of youngsters and their parents.

Robert Harrell, Jr., a documentary maker, was recognized for bringing the violence problem plaguing the city to the forefront, through his documentary film: “Death by Design.” Harrell was the only adult to receive an award.

Free Teens USA, an organization that provides recreation and volunteer opportunities for urban teenagers, was recognized with a large group of its members being present at the 8th Annual Dr. Martin Lither King Youth Recognition Awards.

Simmons, the eighth grader from School Seven, said although he likes basketball and is the captain of the team at his school, his main focus is on learning and furthering his education. After he finishes middle school, Simmons said, he will attend a private school, mentioning few schools: one in Wayne and another in Paramus – Simmons has already been accepted to one.

“I’m very proud of him,” said Pearson, the basketball coach.