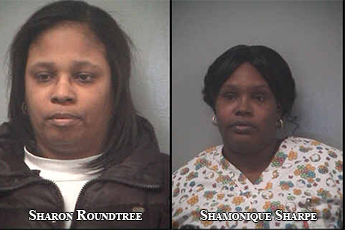 Shamonique Sharpe, 28, a resident of East Orange, and Sharon Roundtree, 45, a city resident, were arrested earlier today in connection to computer equipment theft out of the city’s public schools. Sharpe and Roundtree were processed, and released by detectives.

During the summer Berdnik’s office received complaints from the district that a few portable computers had disappeared from the school building. “Last summer the Passaic County Sheriff’s Office Internet Crime Unit received a complaint of multiple Tablet computers (I-Pads) reported stolen from the Paterson Public School System,” read a statement released out of the sheriff’s office today.

Detectives were able to track some of the stolen computers, finding the devices had fled outside the borders of New Jersey. “During the fall of 2013, we located two of the stolen iPads outside of the State of New Jersey and with the assistance of law enforcement in North Carolina and Colorado were able to recover the devices,” according to Berdnik.

After recovering some of the stolen goods, the office reached out to Sharpe, who was at this point a person of interest, and it was confirmed that she indeed snatched the devices out of School 30 while working as an outside contractor. “Sharpe took at least four iPads from Paterson P.S. #30,” according to the sheriff. Sharpe, who previously worked at a security firm that was contracted by the district, did not act alone. Roundtree, who served as the parent liaison at the school, aided her in stealing the tablet computers.

Both Sharpe and Roundtree have been charged with theft and receiving stolen property. The two iPads that were recovered are being returned to the school, while detectives continue their investigation.

“These resources were meant to educate children, not to be utilized by others for personal use,” said Berdnik, in a statement. “The Sheriff’s Office will continue to investigate and arrest individuals who steal public property.”