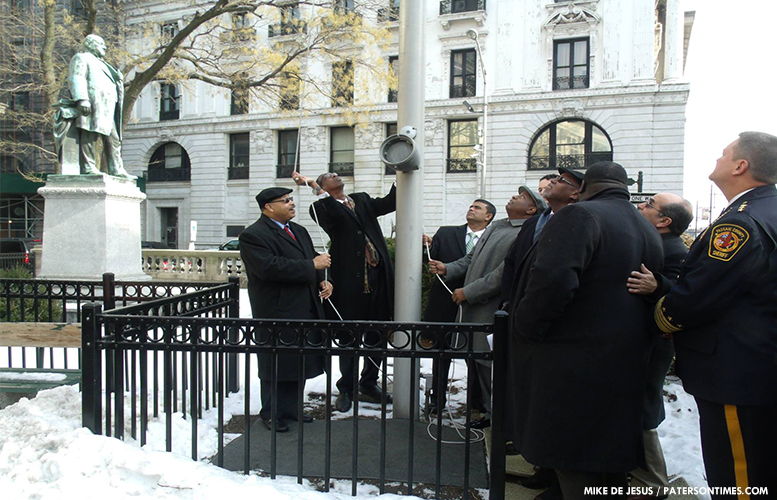 “We’re not just raising a flag,” said Jeffery Jones, the city’s mayor, addressing a crowd of about a hundred people from the steps of City Hall. “We need to remember our struggles. “We’re trying to make sure that we never forget our struggles.”

Indeed, the city’s African-Americans were barred from raising a flag at the city’s schools much less hoisting it above the main governmental building in the city until 1969. That year a group of students at Eastside High School successfully challenged the political establishment and managed to fly a red and black and green flag at that school making way for today’s event.

“Mayor you’re right, we’re not just raising a flag today. Black history month is a month to raise awareness, raising your involvement in the community to improve what’s around you in the community,” said Andre Sayegh, the city’s council president.

The North Jersey Girl Scouts recited the Black National Anthem as the flag was pulled up the pole by the mayor surrounded by county and city officials.

Some of the residents who were honored during Saturday’s ceremony inside the City Council chamber.

Each honoree was given a framed resolution recognizing their contribution to the community. “This is our birthday,” said Jones citing a number of famous African-Americans who were born in February, and managed to leave their mark on American history. “You think of the contributions of so many,” said Jones.