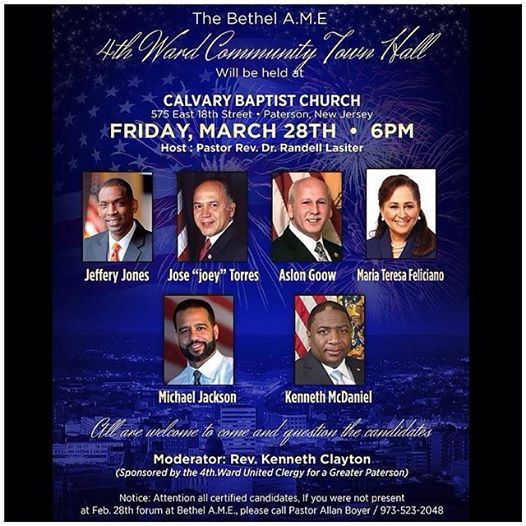 Three different candidate forums are set to take place prior to the end of March organized by city organizations to explore the views of mayoral and council at-large candidates.

On Wednesday, a council at-large candidate forum is being hosted by the Hillcrest Neighborhood Association inside School 27 on Richmond Avenue.

“Candidates will have the opportunity to present their platforms and address residents’ questions and concerns,” said Rita Gernant, vice president of the association, in an email.

On Friday, a mixed forum for council at-large and mayoral hopefuls, will be held inside the Calvary Baptist Church on East 18th Street. Friday’s forum is sponsored by the 4th Ward United Clergy of Greater Paterson, an organization that works with the city’s churches.

The following week another mixed forum is being hosted inside the city’s housing authority building on Temple Street.

On Monday, a mixed mayoral and council at-large forum is being hosted by the First Ward Community Development Corporation, inside the Christopher Hope Building on Temple Street.

Organizers for each of the forum are entreating residents wishing to attend to bring and present their questions to the moderators prior to the start of the discussions. “Due to the large field of candidates, questions from the public may be submitted to the moderator for consideration,” said Gernant. “Please arrive early to ensure your voice is heard.”