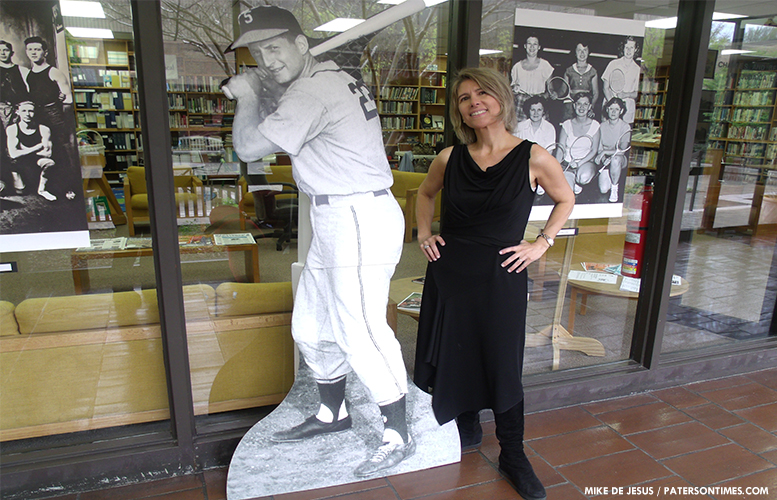 A photo exhibit celebrating the rich sports history of the city was on display this past Sunday afternoon at the Wayne YMCA.

Older city residents associate sports and the city with greats like Larry Doby and Johnny Briggs, not taking into account the sports heavy environment of the city that allowed these greats to emerge.

Rittenberg’s son Marty Rittenberg adds context to a photo featured in the exhibit showing Lou Costello with a baseball bat. “It was after the war,” recalled Rittenberg. “Well, it was the last team of women baseball players still together. They were barnstorming around the country playing exhibition games.”

When they got to Paterson, a team of all-star old-timers was pulled together from the local talent to face them. It turns out, Costello, a native Patersonian, was in town for a visit from Hollywood and he wanted to jump in.”

The team and Costello were at Eastside Park following World War II. “Lou Costello just rolled up his pants — and they gave him a shirt.”

Rittenberg’s father is heavily featured in the exhibition put together by the North Jersey Jewish Society with funding from the New Jersey Historical Commission through the Passaic County Cultural and Heritage Council, according to organizers.

Rittenberg, the father, a Jewish Patersonian, was a local sports hero who for decades, in separate stints, coached basketball, football, baseball, track and field and even fencing in what was then known as Central High School.

“He always had a broad smile,” said the son. “He was looking out for every kid. He wanted to see them succeed.”

The high school coach was the inspiration for the society’s exhibit. “As we started pulling things together from the collection about Mort, we saw how rich and cross-cultural it was, what an important part of life sports played for so many years in the city,” said Dorothy Greene (no relations), the society’s president. “We expanded the scope of the exhibit, but Mort remains at the heart of it.”

Christina Deutsch, pictured next to a cut out of local baseball legend Jake Edelstein, curator for the exhibit, said, “At first, it was a stretch for me and I was a little nervous because I didn’t feel I knew much about sports.”

Deutsch has worked with the city’s public libraries, the Lambert Castle, and Ridgewood Public Library. Although she did not know much about sports, she said she knew enough about the city’s history to delve into its sports legacy. “I do know about Paterson history, and was delighted to see how its diversity expresses itself again in this domain,” said Deutsch.

The exhibition will be open free for public until July 4th, 2014 at the Wayne YMCA, 1 Pike Drive, Wayne.

Corrections: An inaccurate sentence stating Costello coined his famous comedy routine ‘Who’s on First?’ in Eastside Park in the 1940s has been removed from this article. [J]