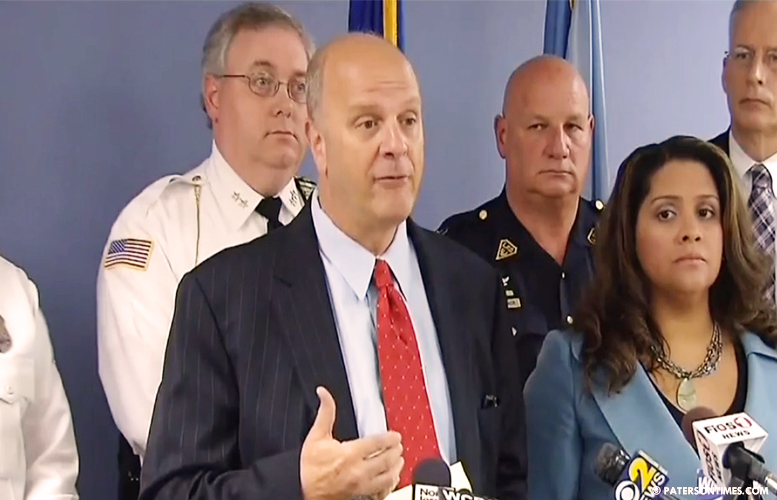 A two month long investigation into the city’s drug trade that affects the entire northern half of the state resulted in the arrest of 325 individuals, confiscation of 11,794 bags of heroin, and the recovery of 32 guns, announced John Molinelli, the Bergen County Prosecutor, on Tuesday afternoon.

Molinelli (pictured left) said his office working with the Passaic County Prosecutor’s Office and other law enforcement agencies conducted a two-month long investigation into the city’s drug trade which resulted in the arrest of 285 drug users mainly from suburban communities.

40 drug dealers mainly from the city were arrested during the operation, said Molinelli. 180 residents of Passaic County, 100 from Bergen County residents, and 40 from Morris County were apprehended, said Molinelli.

“We learned that the users, as in our past initiatives, are from a wide array of professions. They are accountants, they are professionals,” said Molinelli. Drug users were arrested after they purchased heroin from dealers in the city. Once arrested, they were transported to Bergen County for questioning.

Some were provided with rehabilitation options, according to the Bergen County Prosecutor’s Office.

“Average age of all of these users is approximately 24 to 25 years old,” said Molinelli, highlighting heroin appetite of suburban young people that fuels the city’s drug trade.

The eight-week operation involving approximately 50 law enforcement agencies resulted in the shutdown of two city heroin mills and the recovery of 1,200 grams of raw heroin which after packaging would have yielded 60,000 bags, according to authorities.

The initiative focused on the city’s open air drug markets resulting in the recovery of $25,000 in cash, said authorities.

Molinelli said most of the buyers who venture into the city from communities as far away as Morris County often end up being the victims of robbery.

“Approximately 80 to 90 percent of suburban users that are traveling to Paterson at one point or another are getting robbed,” said Molinelli. “They go, they look to buy the drugs, and instead of buying the drugs they are confronted by an individual that just points a weapon at them or makes a threatening gesture, and they just rob them.”

After being robbed the buyer simply drives back and returns with more money to purchase the drugs from a different dealer in the city, said Molinelli.

Authorities flashed faces of those arrested during the operation on a television screen populating the screen with white, suburban faces.

“This is not a Paterson issues, as you will see from the people that have been arrested, this issue of heroin addiction and distribution affects all of these surrounding communities,” added Camelia Valdes (right), Passaic County Prosecutor. “It’s is an issue that is affecting lives, and this is our latest attempt at saving some of those lives.”