Torres sworn in as 46th mayor of Paterson | Paterson Times 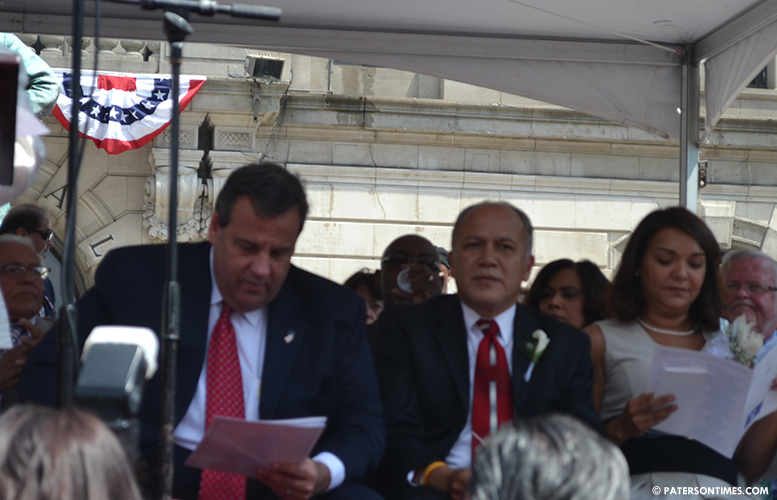 Jose “Joey” Torres was sworn in as the 46th mayor of the city on Tuesday morning for his third term after a four-year hiatus.

Many political figures came out to show support for the new mayor including Bill Pascrell, congressman representing New Jersey’s 9th congressional district, and governor Chris Christie. The governor administered the oath of office during the two-hour long inaugural ceremony.

“I’m happy to be in Paterson and happy to celebrate with the people of Paterson,” said Christie.

Pascrell who supported Andre Sayegh, Torres’ opponent, said the mayor needs everyone to work together to move the city forward. And he is willing to work with the new administration.

Following the oath, Torres began his address by sending a sorrowful thank you to his father who passed away days after his son won his 3rd term as mayor.

Torres also made sure to tackle important issues that have plagued the city including the ever increasing crime rate which he labeled as the number one priority. “Like you, I am tired of seeing the youth of our city wasting away,” said Torres.

Torres reassured residents that he has implemented a plan to bring back 25 new police officers ever year he is in office starting from this year.

Along with his plan to address crime in city, Torres also touched upon investing in the damaged roadways in the city, advocating for new state of the arts schools and making the city a tourist attraction for visitors.

Torres also explained that many customers of small businesses in city cannot travel through the city because of the potholes and terrible road conditions. “I have requested authorization to rebuild 170 of the city’s primary roads,” said Torres.

Torres has great expectation for the city to become a tourist attraction with expanding development of the Great Falls National Park.

“The small businesses of Paterson are our back bone. We need to capitalize on those businesses as well as the tourism potential of the Great Falls,” said Torres.

Torres also stated that he understands the desperate need for safe, clean, and affordable housing in the city. “I have already taken the steps to introduce an ordinance that will amend our vacant building ordinance which will enable us to implement a neighborhood stabilization program that will create a housing rehabilitation trust in the amount of $30 million dollars to support this initiative,” said Torres.

The new mayor hopes that this will stabilize neighborhood block by block and ward by ward. Torres said that he knows it will not be an easy task addressing any of these issues but together the city can achieve it.

“Let’s make a new story together, making our city great again depends on us,” said Torres.