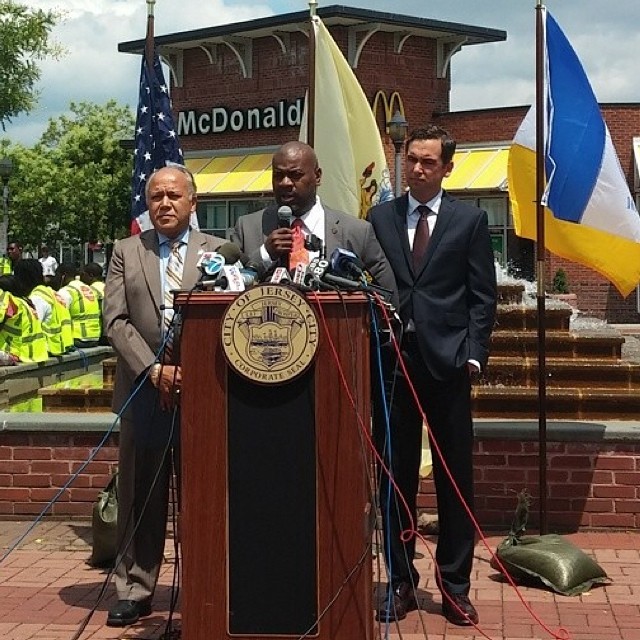 The initiative will knit together police departments of Newark, Jersey City, and Paterson to deter offenders from evading police following a crime committed in one city by moving to another.

Mayor Steven Fulop of Jersey City said all too often an offender commits a crime in Newark and while authorities there are after him he is able to escape jurisdiction by running to Jersey City where he commits further offenses.

“There are examples of people from Newark doing horrible things in Newark and then coming into Jersey City,” Fulop said.

Under this initiative the three police departments will collect and share intelligence on offenders, gangs, and illegal weapons. “We form a bold new strategic partnership designed with one goal in mind,” said Torres, “the reduction of street level violence in our inner cities.”

Torres touted the success of the Paterson Police Department’s Ceasefire Unit adding, “Prior to the inception of this unit the number of non-fatal shootings and aggregate assaults with firearm routinely exceeded over 60 per year and the solvability rate hovered around 20 to 25-percent.”

Once the operation became part of the city’s law enforcement fabric the number of incidents plummeted by nearly 37-percent and the solvability rate of gun related incidents rose to an unprecedented 50-percent, Torres said.

“How do we implement best practices in our cities to help reduce the level violent crime that has taken place over and over again?” added Ras Baraka of Newark. The cities will take best practices in public safety from each other to build more effective police forces.

The initiative comes following two recent deadly incidents in Paterson and Jersey City. “The recent tragic death of Genesis Rincon in Paterson and office Melvin Santiago in Jersey City broke our heart, but it must not break out spirit,” Torres said.

Although the center piece of Monday’s press conference held on Martin Luther King Drive in Jersey City dealt with law enforcement and public safety, the mayors underscored that combatting violence will require much more than just a partnership between the three police departments.

“It starts with public safety, but there are lot of other areas that are part of the public safety conversation,” Fulop said. Fulop mentioned a joint summer jobs program, prisoner re-entry program, and even the possibility of using the three cities’ large population base to purchase mundane goods like road salt at reduced cost to taxpayers in the three cities.

The three also briefly mentioned tackling the foreclosure problem that has left hundreds of properties abandoned costing each city thousands in tax revenue.

“If you really aggregate the three cities, based on the size we have collectively, you could really start to move the dialogue in a meaningful way,” Fulop said.

Baraka wants to continue the dialogue between the cities by hosting a meeting in September. “We’ll try to host an urban mayors roundtable in Newark in September with the help of mayor Torres and mayor Fulop centered around public safety and issues of violence and gang in our communities,” Baraka said. “I think it’s just a brilliant idea for us to get together and share best practices.”