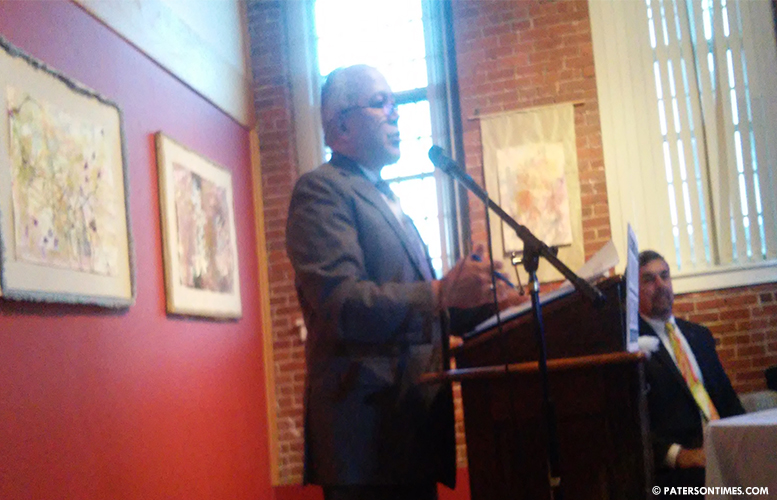 Opposition mounted against a $135 million plan to place two large concrete tanks at the current Levine Reservoir site inside the Great Falls Historic District during Monday evening’s public hearing on the project inside the Paterson Museum.

Mayor Jose “Joey” Torres threw his weight against filling much of the reservoir to place containers at the site to protect drinking water supply from contamination as mandated by the federal government.

Torres said he will present a resolution to the city council on Tuesday, aligning with two-dozen other municipalities to delay the project until 2016, when the United States Environmental Protection Agency (EPA) will review its Long Term 2 Surface Water Treatment Rule (LT2 Rule).

The rule requires water companies to ditch open reservoirs in order to protect drinking water from microorganisms. “There are about 14 open water reservoirs left in the county,” said Joe Bella, director of the Passaic Valley Water Commission. Bella said the reason for this is because drinking water is easily contaminated if it is purified and then pumped back into an open reservoir.

The director also stated that the lead problem that the city suffers from can also be addressed with the tanks. Presently, the commission is unable to mix corrosion inhibitor or phosphate into the water because in an open reservoir it will result in an algae bloom. The phosphate serves as a layer of coating inside pipes, preventing lead from mixing with drinking water from antiquated pipes.

Torres said he will reach out to the mayors of Clifton and Passaic to get them on board in delaying the project. The three cities jointly own the commission which provides water to a large swathe of the Garden State. Torres wants the 30 municipalities which will see a rate hike as a result of the spending necessary to implement the mandate to gather in one place with their mayors and business administrators in front of the state’s federal representatives to talk about and find a resolution.

Keith Kazmark, the mayor of the Borough of Woodland Park (formerly West Paterson), who has been fighting the commission’s plan to drain Great Notch and New Street reservoirs, denounced the plan. He said the entrances to both Rifle Camp Park and Garret Mountain Reservation are the two reservoirs in his town, therefore any alteration to the area will negatively impact the borough.

“The aesthetic value of this landscape will forever be scarred if this project goes through,” said Kazmark.

A city resident, Jim Kooz, who lives in the area, concurred with mayor Kazmark, stating: “The reason why I bought this home was because of the reservoir.”

Kooz said he was against the plan and if he has to he will fund a prolonged fight.

“These tanks are going to go just up the hill from us. They’re definitely going to impact the historical district just when, we believe, we’re on the cusp of getting back to the next level as a cultural historic center,” said Ken Wallo, vice-president of the Ivanhoe Artists Mosaic.

The Hamilton Partnership for Paterson also denounced the plan. “The effect that such a structure [tanks] would have on such a spectacular view of landscape will be detrimental to the urban oasis we’re trying to establish,” read a statement from Leonard Zax, president of the partnership.

“We should talk about waiting until 2016 when the LT2 rule finally gets reviewed,” said Alan Weinberg, head of planning and policy at the New Jersey Community Development Corporation (NJCDC). “We don’t want to be the first ones to rush in and spend all our money before that happens.”

Weinberg urged the commission to consider alternatives. The commission has been receiving criticism for some time over its plans, as a result it looked at three other sites in the city to place the tanks. Two came out inadequate: a spot on New Street and a former quarry nearby; the third option, the former Vista Site off Totowa Avenue is the only real alternative.

In front of about, 130 people who packed the room at the museum, Torres suggested an alternative use for the reservoir. “We know we have a problem of maintaining the water within the raceway, so if we’re thinking of draining a reservoir that sits at the highest of the Great Falls, then I challenge the engineering marvels to re-channel the water of the reservoir [through the raceway],” said Torres.

The mayor wants the water to circulate through the raceway and be filtered and pumped back into the reservoir.

“This is a National Historic Park, and what you guys are trying to do is to take and skew what we’ve worked for years to finally establish,” said Manny Martinez, school board member. “The outpouring of people here today is a demonstration that it’s not going to be tolerated and it’s not going to happen.”