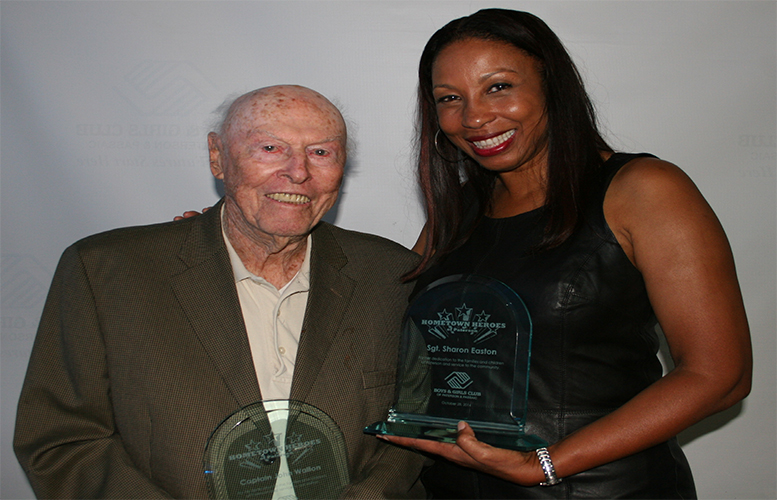 In a ceremony organized by the Boys and Girls Club of Paterson and Passaic on Tuesday evening at the Art Factory two city residents were honored for their services to the city.

Fire captain John Walton who devoted 32 years in the city’s fire department serving the city was honored as a hometown hero of Paterson. The other honoree was police sergeant Sharon Easton who organizes an annual teen summit that’s attended every year by over a thousand teens.

Easton tries to cultivate positive virtues of hard work leading to success in teenagers and to keep them on track towards becoming productive citizens.

“To receive this award from the Boys & Girls Club means a lot to me,” said Easton. “It’s so important to make sure that our youth have opportunities to succeed so that they can create their own success and ensure their future.”

A Pearl Harbor survivor Walton was also thankful to be recognized for his services not just to the city but also to the country. “This is a great honor,” Walton said. He was handed the award by the city’s fire union president Jerry Behnke.

In attendance were firefighters and police officers as well as other members of the community. The club estimates over 200 people attended the ceremony.

“I’ve lived in Paterson my whole life and I’m glad to see so many of today’s firemen here,” Walton said. Walton will celebrate his 100th birthday in December.

“With the help of our Community Partners like the police and fire departments, we will continue to achieve our mission and serve the children of Paterson and Passaic,” executive director of the club Peter Thornton said.

The club which has over 1,000 members between the age of 5 and 18, offers a variety of programs for city youths providing them a safe place to be after school. “Our innovative programs educate, engage and empower youth to achieve success in all aspects of their lives,” Thornton said.