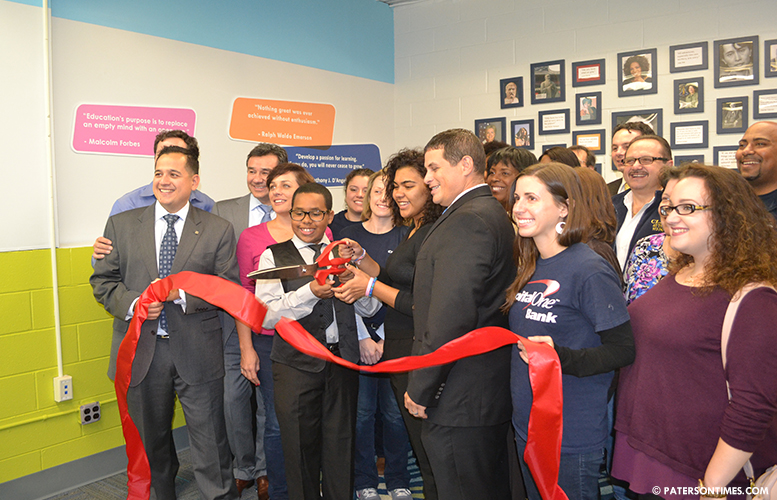 Two generous organizations teamed up on Wednesday afternoon to re-design and re-utilize a storage room in the second floor of the Boys and Girls Club building on 21st Avenue. 15 volunteers from the Capital One Bank and Heart of America Foundation devoted over 50 hours of their time and spent an estimated $40,000 to re-equip the room with a bookshelf stacked with hundreds of books and a state-of-the-art smart board.

“We have about a thousand kids we serve in Paterson and Passaic. Now they have access to a smart board, a learning environment that’s productive and reflects the fact we believe in them, it’s a $40,000 investment in the kids,” said Wendy Worden, chief development and marketing officer for the club.

The freshly painted room was also equipped with what volunteers call the “Readers’ Leaders Wall” where pictures of well-known historical figures hang. The wall bears pictures and quotes from more than a dozen great figures: the images of the great Athenian philosopher Plato, the legendary American writer Mark Twain, and Oprah Winfrey.

Inspirational quotes also graced the four walls of the room. Before volunteers targeted the room, Genesis Gonzalez, 15, a member of the club, said the room was dingy and filled with boxes. Gonzalez said she has been with the club since she was seven-years old and now volunteers to help younger kids with homework.

“Those kids are going to be surprised,” said Gonzalez. 250 club members were surprised with three free books courtesy of the bank and the foundation. Jessa Thomas, community affairs with the bank, said the room can be utilized as hangout-out space for club members and also a reading room.

While hanging out or reading in the room, Thomas said the members will have access to an entire row of financial books.

Melissa Hayes, manager at the foundation, said her foundation was in search of undertaking a project in the New York area and Thomas reached out to them with the club’s reading corner idea.

The foundation, based out of Washington D.C. makes it its business to promote literacy among youths. “Our main focus is to bring books and resources to underserved communities,” said Hayes. She said the foundation has undertaken similar projects around the country including in the country’s capital.

Worden said the new reading corner will be in much demand by the club’s membership. “The kids I think will be fighting over this room,” said Worden.

Gonzalez, who is a 10th grader at the Harp Academy, said it’s yet another safe and clean space for city youths to not only read but also utilize new technology, like the smart board. She particularly thought the quotes were interesting. “I like the pictures with the quotes,” said Gonzalez.