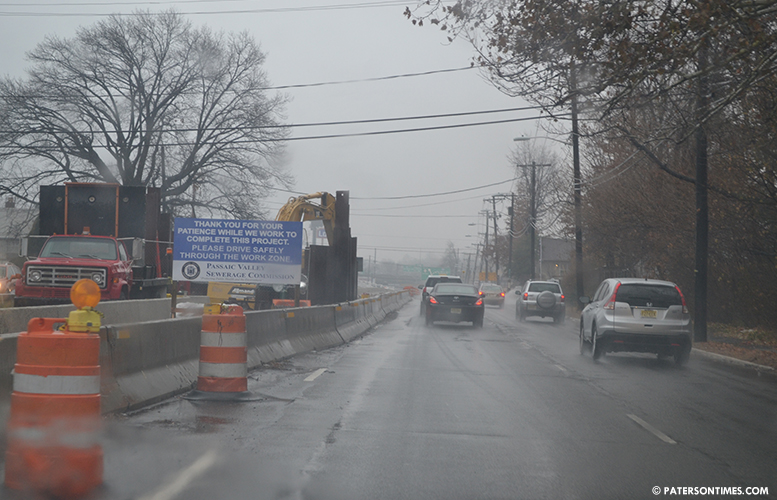 The underground sewer pipe rehabilitation project that has hamstrung Route 20 also known as McLean Boulevard for more than a year is set for completion at the end of the month, announced the Passaic Valley Sewerage Commission.

Undertaken by the commission in conjunction with the New Jersey Department of Transportation to rehabilitate 90 year old Main Interceptor Sewer Pipe, the project began in September 2013, suffered a few setbacks, and is set for completion at the end of December or shortly thereafter.

The crews for the past year have been fitting a smaller pipe into the existing sewer pipe 30 feet below the highway, according to the commission.

There have been several delays in the project which was supposed to have been finished within four months. In May 2014, the commission said “unanticipated quantity of bedrock within excavated area that require more extensive excavation” and “sewer pipe anomalies discovered” after underground work began and uncooperative weather resulted in delays.

In October, the commission said above average rainfall in the area further delayed the project that was promised for completion by mid-November. “We’ve been waiting a very very long time,” said William McKoy, 3rd Ward councilman. “I’m delighted and pleased to hear they have an end date.”

McKoy said he has received numerous complaints from commuters, businesses, and residents about the project which reduced the highway from three lanes in each direction to just two in each direction.

Approximately 2,020 linear feet of concrete pipe has been installed which is the total amount of relining for the project. “We are in the process of grouting the voids created between the new and old pipe, and will shortly be preparing for backfill and site restoration,” read an announcement from the commission.

“It has hampered businesses on Route 20 Corridor, so we’re thankful the repairs have been done,” said McKoy. The councilman said the businesses suffered greatly as work dragged on at the site due to numerous delays. He said now with the work winding down and a completion date set establishments can get back to full business.

“I use that roadway to get to work every morning, so I’m reminded every single day of the continuing delay,” said McKoy. “But we know that in some cases in order to get progress and improvement we have to go through some inconveniences.”