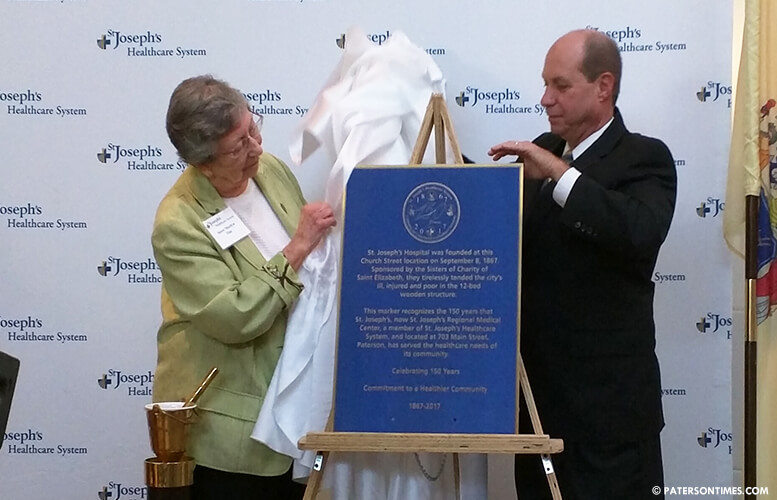 “That beginning has mushroomed into a highly regarded healthcare system this many years later,” said sister Marilyn Thie, chairwoman of the hospital’s board of trustees, at the unveiling ceremony in the lobby of the hospital on Main Street.

“While much has changed at St. Joseph’s over the years and many new changes will occur, somethings have proudly stayed the same and stay the same,” said Kevin Slavin, president and chief executive officer of the St. Joseph’s Healthcare System. “Future generations should find comfort in knowing St. Joseph’s commitment to compassionate and quality care hasn’t changed since the day it opened in 1867.”

A year after it opened, the 12-bed hospital moved to the Fonda Farm on Main Street, where it has expanded and grown to become the busiest outpatient center in New Jersey. Thie and Slavin unveiled the plaque at the hospital’s lobby in front of a large crowd.

Founded by the Sisters of Charity of Saint Elizabeth the hospital “tirelessly tended to the city’s ill, injured and poor,” reads the plaque which will be posted at the Church Street location in the course of the year-long celebration.

Slavin said there are only four other hospitals in the state that have the distinction of having been around for 150 years.

“None are as strong or vibrant as St. Joseph’s is today,” he said. He said the hospital has been known for innovation throughout its history and it intends to continue that tradition heading into the next 150 years. This year, the hospital became the first in America to introduce an alternative to opiate centered approach to treating pain which earned it praise for ditching opiates that have fueled a heroin epidemic in this country.

“St. Joseph’s has been a godsend to this city and its people,” said mayor Jose “Joey” Torres, who was born at the hospital. He said his pregnant mother fell off a chair, was rushed to the hospital, and prematurely gave birth to him.

Torres’ parent hadn’t thought of a name for their son so he was named after the hospital. St. Joseph’s is the sole remaining hospital in a city that had three at one point, said council president William McKoy.

McKoy said the city had the Paterson General Hospital on Market Street and Barnert Hospital on Broadway both of which closed.

“The best survives,” he added. In 2015, the hospital cared for more than 1.5 million people including more than 163,000 emergency room visits.

It is ranked as one of the “Best Regional Hospitals” by U.S. News and World Report.

The unveiling of the plaque was preceded by a moving performance of a “Jersey Boys” medley by the Rosa Parks High School choir conducted by the high school’s chorus director John Chapman. The dozen young people also performed Billie Holiday’s “God Bless the Child” and sang “The Star-Spangled Banner” to great applause.

“Providing a 150 years of continuous service is truly an amazing accomplishment,” said Slavin. He said the hospital has been providing care to patients 24 hours a day, 7 days a week, and 365 days a year without having “missed a beat in 150 years.”