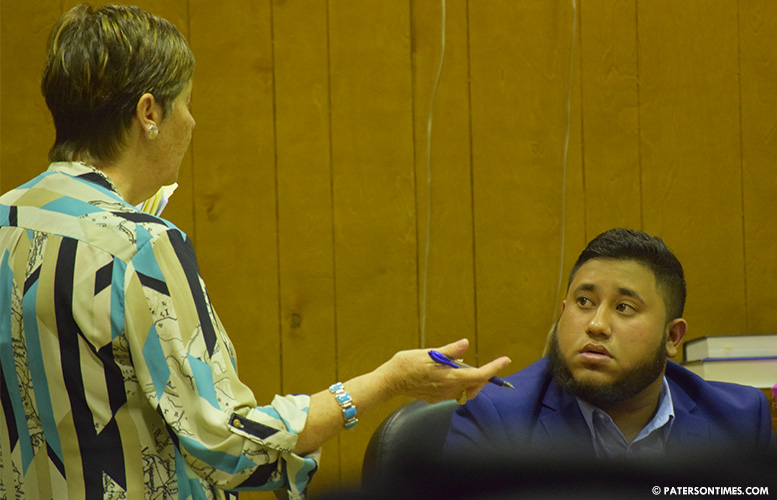 The man who signed as an assistor for more than 60 mail-in ballots while volunteering for councilman Shahin Khalique’s campaign could not identify the gender of one resident he claimed to have assisted.

Foyes Ali, the assister, said he helped Isidro Amarante with her mail-in ballot at her house. He told former councilman Mohammed Akhtaruzzaman’s attorney Susan Champion she signed the mail-in ballot in front of him.

“Do you think Isidro is a her?” asked Champion. “You just said her house.”

Isidro Amarante is a him. Ali thought the name Isidro belonged to a female. He quickly began to change her to him.

Isidro Amarante and his wife Grecia Amarante, both Jehovah’s Witnesses, testified last week that it is against their religion to vote. Both have Ali listed as their assistor on their mail-in ballots, but neither knew him. The wife said she did not know she was voting until her son told her after the fact; the husband said he did not know voting was possible through the mail. Under questioning, the husband at one point said: “I guess I have [voted].”

Shahin Khalique’s attorney John Carbone used the last statement by the husband to question Champion’s mode of questioning Ali. The attorneys and judge Ernest Caposela compared notes to figure out whether the husband admitted to voting.

The couple said they signed the mail-in ballots to “support the community” rather than to cast ballots.

In all, Champion questioned Ali about 10 voters who said they neither voted in the 2nd Ward election nor knew their assistor. She began by asking him whether he recalled assisting Miriam Tatis with her mail-in ballot.

“I don’t remember. It happened a year ago,” replied Ali (pictured). He was shown the mail-in that had his signature listing him as the assistor. He then said he did indeed assist her with her mail-in.

“Are you aware Miriam testified she did not vote?” asked Champion.

“No,” replied Ali. He identified many of the voters he claimed to have assisted as family friends or his neighbors.

Champion asked if he assisted Tahmeed Chowdhury with his mail-in. He said he knew Chowdhury from playing soccer. He said he had tea at Chowdhury’s home prior to assisting him with the mail-in.

When told if he knew Chowdhury testified he neither voted nor knew Ali, he said: “I didn’t know.”

Ali is listed as an assistor for Grecia Amarante. Champion asked if he exchanged pleasantries with her prior to assisting her with her mail-in. Ali responded in the affirmative.

“Do you speak Spanish?” asked Champion. Grecia Amarante testified through an interpreter.

“No,” responded Ali. He later said he speaks a little bit of Spanish. The judge reasoned a person using an interpreter is comfortable in a language other than English, but this does not mean the individual cannot speak some English.

“Are all of those people lying?” asked deputy attorney general Alan Stephens to Ali.

Carbone objected to the question. The judge had him rephrase the question. “Were they not being truthful?” Stephens asked Ali about the 10 voters.

“I don’t know. They were probably nervous,” said Ali, who though calm at the witness stand was biting his nails.

The judge also heard testimony from two other witnesses. Asad Afrooz testified he was registered out of 102 Sherman Avenue when he voted in the 2nd Ward election. He did not say that he was evicted from the home on June 8th, 2015.

Champion showed him an eviction document. He said he moved to 408 Union Avenue in the same month after the eviction. He then moved to 124 Albion Avenue in the 1st Ward sometime in 2016 prior to settling at 424 McBride Avenue.

“You were served at 124 Albion Avenue?” asked Champion trying to establish he lived in the 1st Ward during the election.

“Yes,” replied Afrooz. “It was a holiday. I was at my parent’s house,” he said. He said his in-laws reside at 124 Albion Avenue. It is common in Bangladeshi culture to refer to in-laws as parents.

Asked if he knew which ward 124 Albion Avenue was in, he replied: “I have no idea.” He said he was working two jobs and was too busy to change his address from the home from which the landlord evicted him.

Afrooz said when he submitted his mail-in ballot using 102 Sherman Avenue he was living at 408 Union Avenue. He told the judge people have been telling him he could face punishment for voting from the home from which he was evicted.

“People are telling me I’m being locked up. I can’t even get into a coffee shop without being harassed,” Afrooz told the judge.

“You’re not getting locked up,” Caposela told Afrooz.

Totowa resident Nasrin Younus, a student at Montclair State University, voted from 197 Preakness Avenue. She told the court her family moved from Paterson to Totowa on May 15th, 2016.

Younus said her father continues to own the property. She said he rented the apartment the family occupied. In a questionnaire she completed for investigators from the Passaic County Superintendent of Elections Office days after the election, Younus wrote she has been living at 52 Washington Place in Totowa for the past five months.

The deputy attorney general asked if the answers on the questionnaire was accurate. “Because it was rushed I can’t say everything is accurate,” she said. She said investigators visited the Totowa home days after the election, blocked their driveway, and had them complete the domicile questionnaires.

“We had no choice but to sign those papers,” said Younus. She said the investigators “pressured” her and her brother to complete the forms.

“So that’s not accurate?” asked Stephens.

“That’s not accurate,” replied Younus. She said her family purchased the Totowa home in December, but did not move in until May 2016.

The 2nd Ward election fraud trial has been ongoing since September. Champion said she is close to resting her case. The judge expects her to call the rest of her witnesses to the stand by early February.

The trial will resume on January 27th, 2017 at the Passaic County Courthouse.