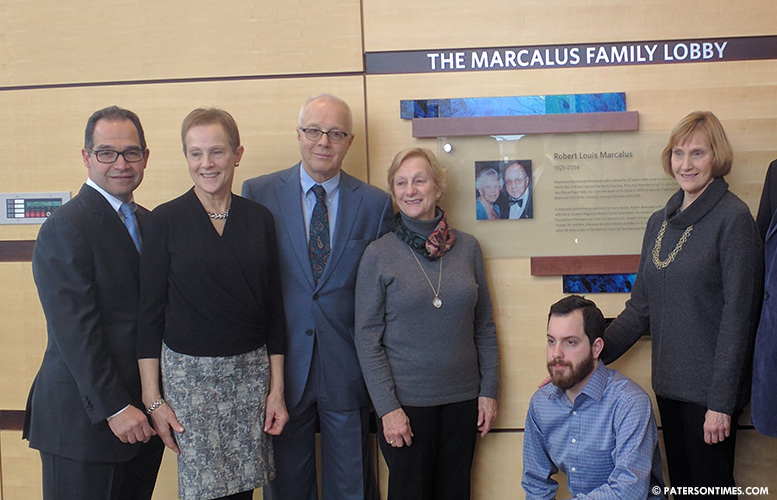 The lobby of St. Joseph’s Regional Medical Center has been named after the Marcalus family — whose forefather Nicholas Marcalus founded the iconic Marcal Paper Mills in Elmwood Park — in recognition of their $1.25 million commitment to the hospital’s renovation.

Hospital officials dedicated the lobby as “The Marcalus Family Lobby” in a brief ceremony on Wednesday afternoon. A plaque in the lobby provides visitors to the hospital with a biographical sketch Marcalus’s son Robert Marcalus, who had a 42-year relationship with the hospital.

Robert Marcalus’s son Nicholas Marcalus (pictured, third from left) said his namesake grandfather emigrated from Sicily to Paterson as a boy in the early 1900s. The grandfather got involved with the hospital and then the son followed.

“He always considered Paterson as his origin,” said the son speaking of his father. “This hospital is special.” Whenever the hospital needed to raise funds for major projects his father would contact donors to raise money.

“He was out making a lot of calls,” recalled the son. Before his death in 2014 he was still raising funds for the hospital, he said. When the hospital needed to raise $50 million in private funds for a $250 million renovation project the family gave the “lead gift” of $1.25 million. Without the family’s lead gift the renovation may not have been possible, said hospital officials.

The family has contributed millions of dollars to the hospital over the years. They have donated a piano and statues that are placed throughout the hospital including one in lobby. The lobby of the hospital’s emergency room is also named after the family, said officials.