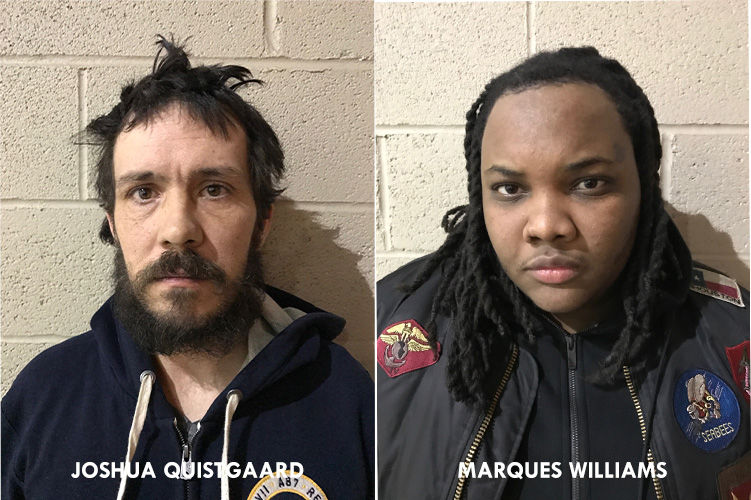 A city man was busted on Wednesday conducting an alleged drug transaction on Wayne Avenue by leaving a bag containing large quantities of heroin inside an unoccupied vehicle for his customer to take and leave cash in its place, according to Passaic County Sheriff Richard Berdnik.

Detectives watched Marques Williams, 26, of Paterson, and Joshua Quistgaard, 39, of East Strousburg, Penn., conduct their transaction at around 7 p.m. on surveillance. Quistgaard idled his Jeep Liberty on Wayne Avenue and James Street.

Minutes later, Williams approached a parked and unoccupied Jeep Cherokee with a bag. Williams opened the back passenger door, placed the bag on the seat, and departed the area.

Moments later, Quistgaard approached the unoccupied vehicle holding paper currency. He opened the back passenger door, placed the money, and removed the bag left by Williams.

Detectives followed Quistgaard and conducted a motor vehicle stop. 200 glassine envelopes of heroin was seized in the stop.

Other detectives remained at the scene watching the Cherokee. Williams returned to the unoccupied vehicle and removed the money left behind by Quistgaard. He was placed under arrest.

Detectives searched Williams’s home at 365 Union Avenue. 600 glassine envelopes of heroin and 28 zip-lock baggies of crack-cocaine was recovered. He had in possession $856 in suspected narcotics proceeds, authorities said.

Berdnik said the surveillance was setup after a concerned citizen notified authorities drug dealing was occurring in the area.

Detectives seized 800 glassine envelopes of heroin, 28 zip-lock baggies of crack-cocaine, and $856 in the bust. Drugs seized in the bust has a street value of $3,500.

“Individuals need to know that if they travel to Passaic County for the purpose of engaging in illegal narcotic activity, they will eventually be arrested and charged,” Berdnik said.