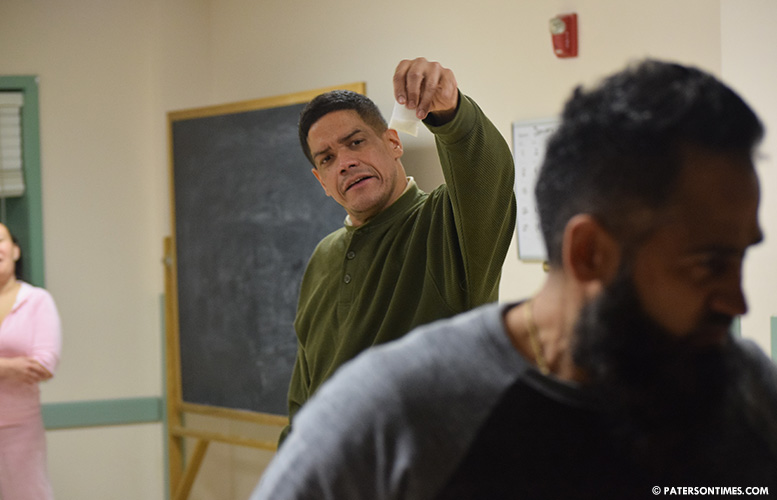 A penniless drug addict approaches Pretty Tony, a well-known neighborhood dealer, on a street corner seeking his next fix. Tony hands the drug fiend a handgun and tells him to rob stores to gather money to support his addiction.

“It went up, they are $20 now, baby,” Tony tells a second addict looking to cop a bag of heroin. The drug dealing scene is one of twenty vignettes in “Visions,” a play about addiction and recovery.

Tony, played by 52-year-old Jorge, is not acting. “I started selling drugs when I was young,” said Jorge. He sold cocaine and crack on Market Street and East 18th Street in Paterson. “We didn’t have no money. I wanted to have nice clothes.” He wasn’t a dealer for too long. He began to consume his own product becoming an addict.

Jorge has been clean for a few weeks. He says he has relapsed “a thousand times.” He is among a group of 20 former addicts in various stages of recovery who have been meeting twice a week since mid-December at the Community Recovery Center at Eva’s Village to rehearse for the play which has been around since 1991.

Bob Lo Bue, author and director of the play, said the play has been performed at rehabilitation centers, hospitals, shelters, youth houses, and correction centers throughout the tristate area. He said some of the past venues include the Integrity House at Meadowview Hospital, Narcotics Anonymous World Convention at the Philadelphia Convention Center, and Hudson Guild Theatre in New York City.

The play is packed with episodes a drug addict experiences on a given day from penury which forces them to commit crimes to selling their bodies to gather money for drugs. It also highlights the damage addiction inflicts on families. The last vignette has all the characters enrolled into a twelve-step program to rebuild their lives.

“Most of them hit their bottoms, one dies, but most of them come into a twelve-step program,” said Lo Bue, who has fought addiction and has been clean for 19 years. “Most of us know what it is like to be an addict.”

Luis, 46, said he did not have a father growing up. He was raised by his grandmother, he said. He began drinking beer and marijuana at an early age before moving to harder drugs.

“I can identify with the play,” said Luis. He said addicts quickly identify with the scenes which are unusually authentic. He recalled a performance in Philadelphia after which a blind woman in wheelchair approached him to tell him a scene mirrored her experience suffering from addiction.

“We don’t got to act because we’ve been through it,” said Francheska, 27. She started abusing alcohol after her mother and father were sent to jail, she said.

The cast, all of whom are recovering from their addiction, attempt to evoke a “I’ve been through that” feeling in the audience. In one scene, Luis’ character, Smitty, runs into his drug dealer while trying to rebuild his life.

The dealer tells Smitty he will return.

“This is not just a play, there are special things behind it,” said Lo Bue. He said for the cast, whose last names have been undisclosed so as not to stigmatize them, the play is a reminder of how far they have come.

“These are not actors. For them, it’s a way to shine,” said Lo Bue. “It’s a healing experience for the performers.”

John, 59, and his son, Waynman, 21, are both in the play. “This is fun. You get to turn yourself into a character,” said John. The father was exposed to marijuana in South Jersey before moving to crack while the son was involved in his high school’s music program where he was exposed to acid and LSD.

“We’re there for each other,” said the father.

The group at Eva’s Village is the fourth troop, said Lo Bue. He said the group is preparing for a performance at the Eva’s kitchen, but is actively seeking out other venues in the city.

“We’re looking to do some free shows in Paterson for those in need to show addiction and more importantly recovery,” said Lo Bue. He said interested organizations or groups can contact him via email at [email protected] or phone at 201-281-4215.