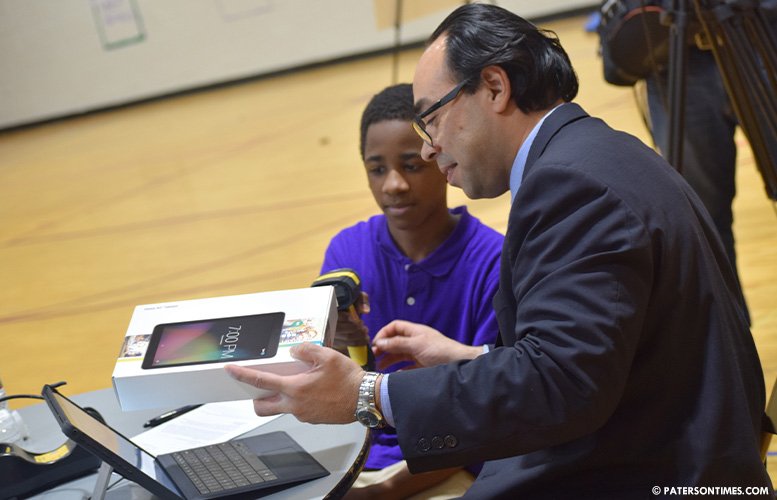 Rashad Abdullah does not have internet access at home. He rises early to get himself to Rosa Parks High School every morning to complete his homework assignments from the previous day that require internet access.

“I’m usually the first one here,” said Abdullah. He was overjoyed when he was given an internet-connected tablet from Sprint on Tuesday afternoon. “This is honestly a blessing,” said the 15-year-old boy studying theater at the high school for fine and performing arts.

Abdullah said when he has assignments that require extensive amount of research he visits his friends’ homes to use their computers and internet access to finish school projects. He may no longer have to go house hopping to access internet.

The 10-inch HP Slate he received is connected to Sprint’s high-speed mobile internet network. It also has hotspot capability allowing him to setup a Wi-Fi access point to connect his laptop or desktop.

“Sometimes a lot of people don’t have access to Google Classroom,” said Abdullah. Teachers at the school use Google Classroom to distribute assignments and organize their classes.

“A lot of students are without internet access,” said Wrathell Gause, an English teacher at the high school. He said students have devices, but lack internet connectivity. Or some have a little bit of data that quickly runs out while watching a webinar.

Jalyn Lyde, principal of the Rosa Parks School of Fine and Performing Arts, said there are parents who cannot afford home internet access. “Parents sometime need money for other things,” she said. “This is another way to get them access to the internet.”

“Homework component has been a challenge,” said Gause. He said a lot of students seek extension to homework assignments due to lack of internet connection. He said the devices make it easier for teachers to assign reading materials. For example he no longer has to make copies of reading texts, he can send links to students to obtain the book or poem from the web.

“A lot of assignments we do is digital,” said Collin Boyle, a communications art teacher. He teaches creative writing and journalism. He said some students use their phone, but that is not as suitable for doing assignments as a tablet with its larger screen.

Boyle said with the tablets students will be able to intuitively annotate reading materials just as students do on paper. “It’s so much easier for us to go paperless,” he said. “Paper is a commodity here.”

“The launch of the 1Million Project pilot program is a hugely important step towards achieving our goal of closing the ‘Homework Gap’ and connecting 1 million high school students who don’t have internet access at home,” said Paletta.

Paterson, which was among 11 school districts, high schools, and nonprofit to be selected to participate in the pilot program, is receiving 500 connected mobile phones and tablets for students. Paletta did not have a total monetary value of the service and the devices.

District officials estimate the figure to be in the millions. The district was awarded 400 smartphones and 100 tablets as part of the program. Devices come with 3 GB of high-speed LTE data per month. Students who exceed this amount will continue to receive unlimited data at a slower 2G connection.

“Technology has rapidly become a heavily relied upon tool in today’s educational environment. Yet, with so many of our students lacking internet access at home, closing the digital divide is essential in our efforts to prepare all students for college and career,” said state-appointed district superintendent Donnie Evans. “We are extremely thankful to have been chosen for this exceptional grant from the Sprint Foundation which will go a very long way in helping our high school students thrive in the 21st Century.”