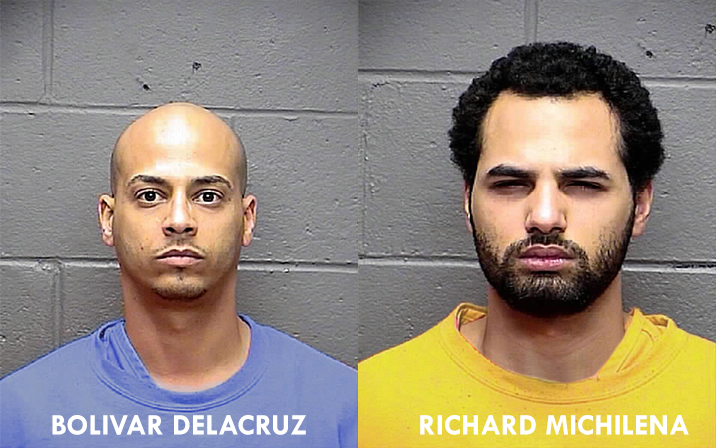 Two suppliers pleaded guilty to trafficking heroin from Paterson into Atlantic and Ocean counties on Monday, according to the New Jersey Attorney General’s Office.

Richard Michilena, 26, of Elmwood Park, and Bolivar Delacruz, 39, of Lodi, pleaded guilty to heroin possession with intent to distribute. Each face 10 years in state prison, according to authorities.

Michilena and Delacruz were among 19 people arrested in April 2015 when the Atlantic City Task Force, an amalgamation of state and local law enforcement agencies, dismantled their drug network that distributed 30,000 doses of heroin every month in Atlantic and Ocean counties.

“By supplying large quantities of heroin for distribution in two of the counties hardest hit by the opiate epidemic, these two men were profiting from addiction and death” said Attorney General Christopher Porrino said.

Authorities seized 16,000 bags of heroin and over $52,000 in cash in the course of their investigation. Heroin supplied by the ring was cut with the deadly substance fentanyl. Authorities said the network used juveniles to sell its heroin.

Members of the ring conducted transactions in front of young children and accepted public assistance subsidies as payment for heroin. Authorities said Michilena and Delacruz were arrested at East 33rd Street and 13th Avenue in Paterson on April 18, 2015 while both tried close a $23,885 cash drug transactions with Helene Gonzalez, 39, of Pleasantville, and Tarik Hopkins, 35, of Galloway.

Detectives seized the cash contained in a purse and 10,000 bags of heroin packed in bricks inside a duffel bag in the backseat of Michilena’s BMW.

The case involving Gonzalez and Hopkins is pending.

“Through this investigation, we cut off a major pipeline of heroin flowing from the distribution hub of Paterson to Atlantic City,” said Elie Honig, director of the Division of Criminal Justice.  “Strategic investigations such as this one save lives in two ways: by disrupting the supply of deadly heroin and by reducing the violence inevitably associated with street-level drug dealing.”

The task force worked with a long list of federal, state, county, and local law enforcement agencies to dismantle the network.

“Nothing less than a multi-jurisdictional partnership was needed to dismantle this drug dealing network that operated in various counties throughout the state,” Colonel Rick Fuentes, Superintendent of the New Jersey State Police, said. “There is no doubt that the actions of these drug dealers contributed to the downward spiral of those who are plagued by heroin addiction. I commend all of the law enforcement agencies that worked together to shut down this major flow of drugs into our communities.”

Sentencing for Michilena and Delacruz is scheduled for June 23, 2017.