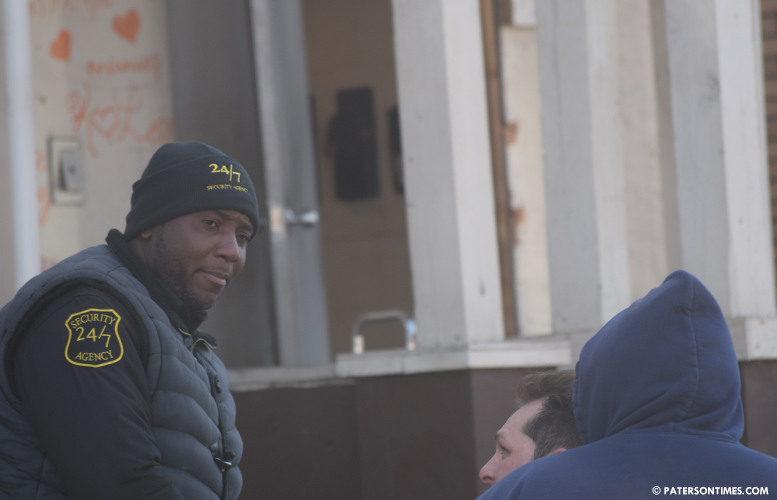 In an effort to provide better security for his tenants in a neighborhood beset by drugs and violence, a prominent local developer has hired a team of two armed retired Newark police officers to patrol the vicinity of his properties.

Both retired police officers with their patrol car were outside of 83 Auburn Street on Thursday morning as a crew of workers toiled to rehabilitate the property next door to 87 Auburn Street where two teenagers were shot last week.

The security force will work 12 hours a day, 7 days a week from 8 a.m. to 6 p.m. on Auburn Street for now, said Charles Florio. Once the effort proves to be successful he will add a second shift that will run from 12 p.m. to 12 a.m., he said.

“My job is to reclaim troubled turf. I’m not going to give my buildings to drug dealers and drug users,” said Florio. He said the officers will provide security at three of his most troubled buildings at 42, 50, and 83-85 Auburn Street.

Florio will spend $30,000 to pay for the security force, he said. This comes a week after he told a reporter some of his people attempting to rehabilitate a property on the troubled street were threatened by someone wielding a shotgun inside his building.

“The presence alone tends to keep the elements away,” said Gregory Millstein, owner of Newark-based 24/7 Security Agency, which is providing the officers in conjunction with Livingston-based Global Mark Security.

The news of the developer deploying a security force was greeted with excitement by residents, community leaders, and city officials.

Nydia Acevedo, who has been living with her nephew at 83 Auburn Street for the past three months, has witnessed firsthand the problems that plague the area. “Maybe now with security it will slow down the drug sales,” she said on Thursday morning.

Acevedo, who is a tenant of Florio’s, is being temporarily relocated from the home as workers rehabilitate the property. “We can come back when it’s nice and new,” she said. She hopes the security force will assist in reclaiming the street, less than a block away from the historic Danforth Memorial Library, from drug addicts and dealers.

“It’s a great idea. I think the visibility will cut the drug traffic down,” said Allen Boyer, pastor at the historic Bethel A.M.E. Church on Auburn Street. “That’s one of our major problem.” He said he hopes the officers pass by his church once in a while.

Ruby Cotton, 4th Ward councilwoman, who represents the area where Auburn Street is located, said, “I think this is a wonderful idea. He is not only making his properties safer, but also other properties around him. Those people will be happy too.”

Cotton said the area is frequented by a large number of drug buyers from the surrounding communities.

Millstein said the officers have experience working in the streets of Newark. He noted the officers will not be taking on the police responsibility of patrolling Auburn Street, but protect the properties owned by the developer.

The officers will be able to disperse crowds that hang out on the porch of the developer’s properties, he said. “They are here to keep the tenants and the workers safe,” said Millstein. The retired officers have their work cut out for them. Earlier in the week, city employees boarded up the property next door to Florio’s and it was broken into last night leading to an arrest, said city officials.

Florio said he wants to be a “model landlord” by looking after the safety and security of his tenants.

“He’s a business man. The thing I love about him is he’s investing in the community. He’s not one of those landlords that come in rape people for high rent and give them sloppy places to live in. He’s not that kind of a landlord,” remarked Boyer speaking of Florio. “The way he fixes up these apartments Donald Trump and his wife can move into one of them.”

Boyer’s church has received renovation assistance from the developer who owns 350-400 properties in Paterson. He has been doing business in the Silk City for the past seven years, he said. He has over 2,000 tenants. He points out never did he seek a tax abatement for any of his apartments.

Florio plans to acquire another hundred properties next year, he said.

“I applaud him for doing this. He wants to protect his investment, but by doing this he is helping the whole area,” said Cotton.