22.6-percent of city students are African-American; however, only 14.1-percent students enrolled at the Paterson Academy for the Gifted and Talented are black, according to demographic data obtained from the Paterson Public Schools.

Marcella Simadiris, a teacher at School 4, has repeatedly questioned the low admission numbers for African-Americans to the high-performing elementary school at numerous school board meetings describing it as an educational “inequity” in the district. Though the data bears out her claim about African-Americans, it also shows the same disparity exists for Hispanics. 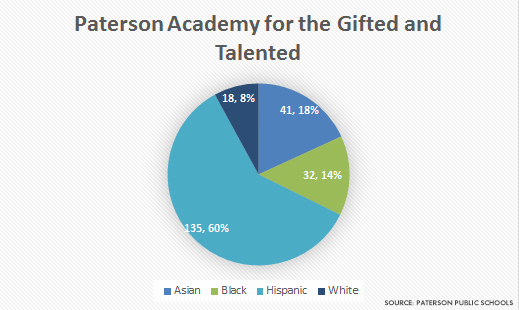 School board president Christopher Irving called the disparity “concerning.” He said the district is working on putting together a plan to possibly revise the admission criteria to improve the “enrollment equity.” While at the same time, he noted, “There has to be kids that fit the criteria.”

Students are admitted based on various test scores, grades, and teacher recommendations. There’s also parent and student questionnaires that are considered for admission.

“You’re never going to have the exact numbers given the condition of the students — the lowest performing students in the district happen to be African-American,” said Hodges. Indeed, Hispanics and blacks lag behind Asians and whites in academics, according to numerous studies.

Irving’s remarks suggested admission requirements should not be loosened for demographic balance.

“What I’m asking them to do is find a way to close the overall achievement gap,” said Hodges.

Hodges said the teachers at the academy are “extraordinary.” He would like for some of those teachers to take on early grade students at School 28 to prepare them for the academy. The academy is inside the School 28 building, but it is a separate school. The academy serves students in grades 2-8. He said this would increase the number of students in the district who would qualify for gifted and talented. 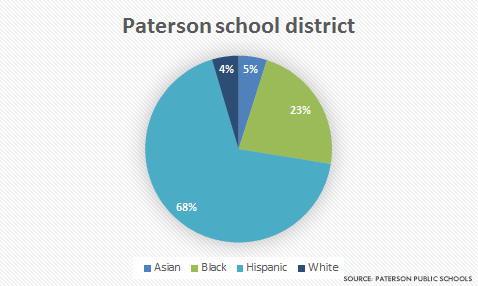 State-appointed district superintendent Donnie Evans in a memo dated January 24th, 2017 told board members “all grades and all teachers within the School 28 building benefit from the same high expectations and positive school culture.” His memo states all school building staff participate in the same professional development. This will likely increase the gifted and talented eligibility rate at School 28, he noted.

Terry Corallo, spokeswoman for the Paterson Public Schools, said high number of parents whose students receive acceptance to the school decline. Since the school began in 2012, 131 students have declined after being accepted to the academy. This does not help to ensure proportional enrollment based on district student demographics.