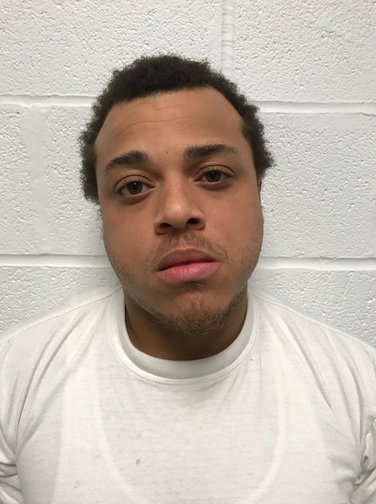 A city man arrested on Monday afternoon after closing a drug transaction on Belmont Avenue and John Street in Haledon owes $28,070 in outstanding child support, according to Passaic County Sheriff Richard Berdnik.

Maga Robinson, 28, approached a GMC truck at around 4:30 p.m. and handed small objects for money as detectives watched, authorities said. He then walked away from the vehicle into 208 Belmont Avenue and his alleged customer Brandon Ciavarella, 25, of Wayne drove out of the area.

Detectives pulled over Ciavarella and seized 10 glassine envelopes of heroin. Authorities placed him under arrest and charged him with heroin possession. He was released pending a court appearance.

At 208 Belmont Avenue, Robinson (pictured) got out and entered a 2012 Ford Escape. Detectives pulled him over and seized 390 glassine envelopes of heroin, 59 zip-lock baggies of crack-cocaine, 60 grams of marijuana, and 24 Oxycodone pills, authorities said.

Detectives seized $586 in suspected drug proceeds from Robinson. Authorities said he was charged with multiple drug related offenses and is being held at the Passaic County Jail pending a bail hearing.