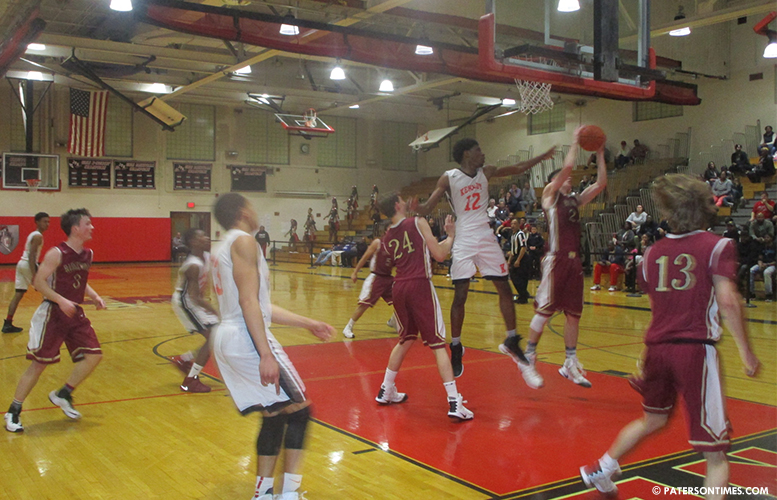 Ridgewood captured the opening tip. Maroon senior guard Michael Schretter pulled up for a 10-foot stop-and-pop for the contest’s first points. Tough as nails Ridgewood junior guard Tommy Carver then baseball-passed the entire court to an open man for a lay-up score.

Kennedy’s offense opened with a drive left and assist by junior guard Jaylan Colon to senior forward Tamir Williams. Ridgewood then broke the Knight’s full court press. However, Kennedy’s sophomore guard Joshuel White gained possession and was off the races for two.

Following a Maroon traveling violation, Kennedy Head Coach Tommie Paterson opted to call on senior forward Joseph Shoulars to enter the contest. The Colon to Williams combo worked again, this time with the latter benefiting from a fancy, no-look pass for an easy score. A Ridgewood fumble in the lane was atoned for by a Carver steal. However, yet another Colon-Williams connection resulted in an electrifying, successful fast break.

Following an exchange of errant passes by both squads, Kennedy’s White cruised up court and dished off to Shoulars for a 3-pointer from the right wing. Ridgewood’s man in the middle, senior Michael Schretter, responded by helping break JFK’s full court press and cashing in on two free throw attempts after being fouled in the paint. In a scenario that would work all evening, Maroon senior forward Quin Peene complimented his teammate with a rocker-step lay-up drive from the free throw line.

As action intensity escalated, Kennedy’s Williams shook loose inside for a nifty left-handed banker off the glass. Carver then danced around the perimeter for Ridgewood and finally found Schretter at the top of the key for a 3-point swish. With the score tied 13-13, Colon drove baseline for the Knights and dished to Shoulars who was hammered in the act. Two successful free throws followed.

Ridgewood was awarded the ball by the referees following an air-ball free throw by Kennedy.  Junior James Lattimore then entered the contest for the Knights along with freshman guards Deishon Harrison and Jah-mahi Cargenie. As time ran out in the first frame, Carver found Chris Zito at the left baseline. The Ridgewood senior forward caught the pass off balance but amazingly recovered to ice an off-balance, acrobatic score as the buzzer sounded.

The second frame was inaugurated with a Cargenie to White assist for a text book 10-foot jumper in the paint.  Colon then fired a bullet to White who was fouled while shooting and converted one of two from the charity stripe.  A steal by JFK’s Harrison resulted in Lattimore hitting pay dirt with an athletic lay-in while at full throttle.  However, the Maroons immediately responded with a Zito 3-point bomb from the left corner.

Kennedy scored courtesy of a brilliant assist by Harrison.  However, Maroon junior Caesar Silvestro responded with a 20-foot jumper.  Zito then caught JFK’s defense napping with an easy score underneath.  With 2:38 left in the first half, Ridgewood clung to a short-lived 26-20 lead.

Silvestro then drove the lane for the Maroons.  The lay-up attempt bounced off the rim but Peene was there for the rebound.  Followed while attempting to shoot, the confident senior hit both free throws.

With 43 seconds left, Ridgewood controlled the ball to set up a final shot.  However, the strategy failed.  With 9 ticks of the clock remaining, a Maroon baseline 15-footer hit nothing but air, yet Kennedy failed to capitalize.

The second half saw Schretter convert free throws.  The Knight’s Dean responded with his first of a number of clutch 3-pointers.  Ridgewood then grabbed no less than 4 straight offensive rebounds, but all ensuing shot attempts failed.  Williams finally ended the hard hat drought for the Knights.  Dean followed by coolly icing another rainbow from beyond the arc.  With the Ridgewood lead now only 3 points, JFK’s Lattimore intercepted a cross-court pass and cruised up the middle for a dramatic bank-score.  The scoreboard read 33-33 with 4:19 left in the third frame.

Ridgewood’s Schretter then crossed the paint, caught an incoming pass, and wheeled left for a banker off the glass.  For the Knights, Lattimore answered with a beautiful left-handed curl shot after knifing across the lane.

Kennedy held the ball for the last shot.  Lattimore drove to the bucket, was fouled, and converted one of two free throws.  With Kennedy ahead by 40-38 and the game clock reading 0:00, the referees inexplicably awarded the ball to Ridgewood.  However the inbounds pass was swatted away by Lattimore resulting in no further need to decipher the mystery.

A Knight air ball was cancelled by a Maroon turnover.  With a 2-point advantage, Kennedy chose to run time off the clock by playing keep away in the forecourt, led by the dribbling wizardry of Lattimore and Williams.  However, Ridgewood’s Peene was the first to score following the time management strategy with a right-wing 3-pointer.  Kennedy’s Dean responded with a head fake and successful 15-foot jump shot.

With 4:34 left in regulation, Colon and Peene engaged in fierce battle under the boards.  A ball of confusion erupted with Kennedy’s White finally ending the tumult with a shot rejection.  Colon then shined offensively with a dynamic drive to the bucket followed by one of two from the free throw line.  Again the score was knotted.

Next was a face-off between Kennedy’s Williams and the Maroon’s Schretter.  The latter drew a whistle and canned one of two free throws.  Dean continued his relentless driving to the bucket.  With 1:05 left in the final frame, Carver flipped a pass to Silvestro who rattled the rim with a resounding dunk.  However, Kennedy’s Colon answered the Ridgewood score with a spectacular circus-shot by adjusting to several defenders in mid-air and culminating with a finger roll.

With 31 seconds remaining and the score 48-48, the gymnasium noise volume reached Richter scale proportion.  Ridgewood misfired on several shot attempts and called a time out with 8 ticks of the clock left.  The ball was inbounded.  A 20-foot Maroon attempt missed its mark.  The ensuing rebound and 10-foot banker looked to be a sure score.   However, the ball astonishingly bounced off the rim to send the game into overtime with the score knotted at 50-50.

The initial extra frame saw several scores by both the teams.  Tied 54-54, Ridgewood again misfired on several shot attempts as the buzzer sounded.

The second extra period saw Kennedy gain first advantage from a Williams’ defensive rebound that gave way to a Dean full-court drive.  The latter was fouled during the shot attempt and converted both free throws.  Carver then solved the Knight full court pressure.  Schretter followed with a score for the Maroons.  As the crowd roared in approval, Kennedy’s Colon offered a picture-perfect 10-foot runner off the glass on a drive from the left wing.  However, Ridgewood answered by following up several missed shot attempts and scoring from underneath.

In an astonishing turn of events, as the second overtime clock wound down to the very last moments, Kennedy’s Dean lofted a 3-point swish.  Knight fans erupted in glee.  However, the joy was short lived due to a time-out called by the Kennedy coaching staff, a mere split second before the shot was attempted.  The result was yet another overtime.

The third and final extra period saw JFK’s Lattimore tip in a missed Knight shot.    Ridgewood responded by continuing to go inside to Schretter who benefited with two successful foul shots.  A missed Knight 3-pointer resulted in Penne finding Schretter for a turnaround in the paint.

Kennedy’s full court pressure saw Ridgewood bend, but not break, down the stretch.  The Maroons eventually escaped with the narrowest of victories in what will certainly be remembered as one of the most incredible games in the history of both schools.