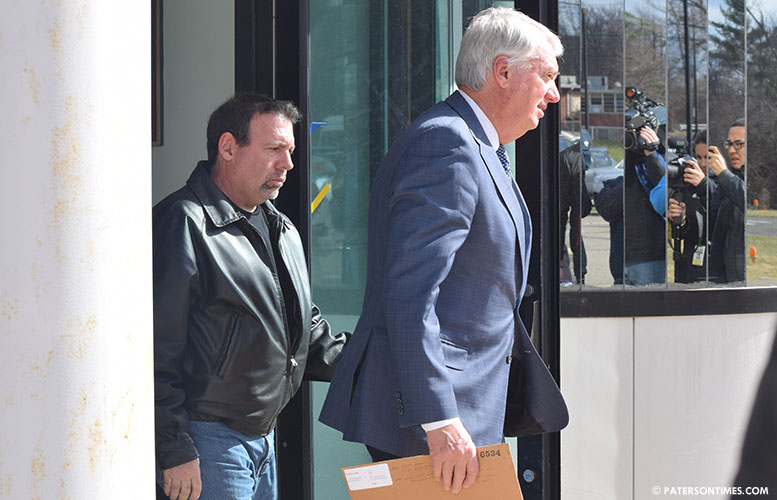 Public works supervisor Joseph Mania accompanied by his attorney walked into the New Jersey State Police Barracks in Totowa on Wednesday afternoon and turned himself in after he was indicted by a grand jury on charges of official misconduct, theft, and falsifying government records.

Mania’s attorney Ray Flood of Hackensack-based law firm Flood & Basile said his client will plead not guilty to the charges.

“We look forward to going to court,” Flood (pictured walking out of police barracks ahead of Mania) told a group of reporters that gathered outside of the police barracks.

Flood said he intends to move the case from the Passaic County to Bergen County court. Peter Aseltine, spokesman for the New Jersey Attorney General’s Office, said the case is already assigned to the Bergen County Superior Court.

He was indicted along with fellow public works supervisors Imad Mowaswes, 52, of Clifton; Timothy Hanlon, 30, of Woodland Park. All three men face the same charges. The three supervisors and the mayor were charged in connection with the renovation of a warehouse on East 15th Street owned by Torres’ daughter Clarissa Torres and nephew Manuel Torres.

Hanlon and Mowaswes were processed at the state police barracks on Tuesday, said authorities yesterday.

The three men and other public works employees worked to renovate the private warehouse and billed the city overtime hours.

Mania is a supervisor for the facilities division. His salary is $74,000, according to city records.

Hanlon is an assistant supervisor for facilities division. His salary is $40,000, according to city records.

Mowaswes is a supervisor of the public works traffic division. His salary is $67,000, according to city records.

All three men have received attention  in the past couple of years for receiving large sums in overtime pay.

Since Torres’ return to office in July 2014 for a third term. The three men collected $268,047 in overtime pay, according to payroll records.

Torres’ salary is $119,000, according to city records. Torres has called the corruption charges against him “baseless” and said he intends to clear his name in court. He continued business as usual at City Hall holding his weekly cabinet meeting with department directors.

A neighbor reported the mayor snuck out of his Arlington Avenue home this morning as news cameras surrounded his house. The indictments unsealed yesterday do not cover the mayor’s alleged use of public works employees at the house, according to New Jersey Attorney General Christopher Porrino.