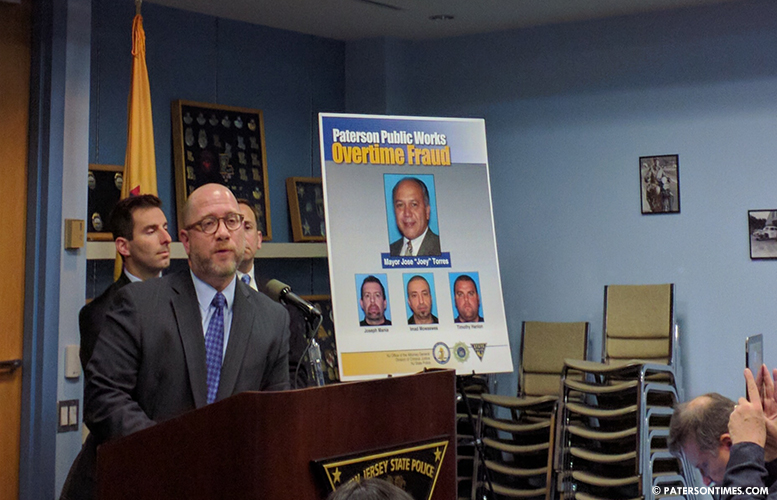 Sammy Torres, the brother, who declined to further comment on Friday morning, claims workers, who were handling painting, carpentry, and electrical work at the failed beer distribution facility, were paid by the family.

It’s not clear which method of payment – cash, check, or some other form of payment – was used to pay the employees. The brother’s public claim this week was previously uttered by those close to the mayor soon after NBC New York aired a series of investigative broadcasts accusing Torres of improperly using city workers for his private projects.

The brother testified before the grand jury that indicted the mayor and three supervisors.

Unbeknownst to the family, the three supervisors also billed taxpayers overtime, claimed the brother. The beer distribution company — “Quality Beer” — which leased 82 East 15th Street, was a firm formed by Torres’ oldest daughter Clarissa Torres and nephew Manuel Torres. Neither the daughter nor the nephew were accused of any wrongdoing; in fact, state officials declined to identify them when the indictments were unsealed.

The brother’s claim made two days after Torres was indicted was preemptively dismissed during Tuesday’s news conference by the state’s attorney general.

“When average people need renovation to their homes or private businesses they engage contractors and they pay them out of their own funds. This is not what we allege happened here,” said New Jersey attorney general Christopher Porrino. “Honest responsible people don’t take their co-workers home during the day and ask them to perform renovation on their personal property on company time or worse ask co-workers to come afterhours and then have their company pay extra by way of overtime. That’s the kind of conduct we allege the mayor and his co-defendants engaged in here.”

Torres was indicted on corruption charges for using city workers to renovate the warehouse to benefit his daughter and nephew. His daughter resigned from her job at the Passaic Valley Water Commission a week before the father’s indictment. She was hired as a personnel technician for $52,000 salary six months after the father came into office for a third-term. Her last day at the job is May 16th, 2017.

“Mayor Torres treated city workers like his personal handymen and treated taxpayer dollars like his own,” said Porrino in announcing the indictments on Tuesday afternoon. “The mayor allegedly stole from the city by deliberately misappropriating city resources for his own use.”

If convicted on all six counts, the four men could each face 31.5 years in state prison, according authorities. If convicted all four will lose their public pensions.

Torres has called the accusations against him “baseless” and has continued his usual routine at City Hall. A day after the indictment was unsealed, he held his usual Wednesday cabinet meeting with department directors.

Torres has yet to surrender to New Jersey State Police. The three supervisors have been processed at the state police barracks in Totowa on Tuesday and Wednesday.

Mania’s attorney Ray Flood of Hackensack said his client plans to plead not guilty in the case. Authorities said from July 2014 to April 2015, the three supervisors and other employees worked at the warehouse at Torres’ behest.

What if the workers were just following the mayor’s orders? When asked about this, Porrino said there are strong laws in place that protect workers from retaliation. Torres has been accused of retaliating against municipal employees, most famously against Jeffrey Heffernan, in a case that went to the U.S. Supreme Court and cost taxpayers $1.6 million — without counting legal expenses — to settle the claims.

Torres directed the work be performed at the location and supervised the work, according to authorities. He was under surveillance for allegedly mistreating a deep-pocketed local developer who hired a private investigator to follow him around.

Torres’ brother claims the mayor knew he was being followed. The brother is a former detective and owner of two liquor businesses in the city.

Mania collected $116,543 in overtime pay in fiscal years 2015 and 2016. Mowaswes collected $76,437 in that same period. And Hanlon received $75,066 in those two years, according to municipal records. Authorities said these three men were supervising other city workers who were performing work at the warehouse.

The attorney general said the indictment covered renovation work at the warehouse, but not the work at Torres’ house.

Porrino noted the investigation is ongoing.

“Jose Torres generously helped his family finance their endeavor to start a local business, but chose to leave the bill with the taxpayers who trusted him to run the city,” said Rick Fuentes, superintendent of the New Jersey State Police.  “I commend the great work of the troopers of the State Police Official Corruption Bureau and our partners for exposing this alleged betrayal of public office.”