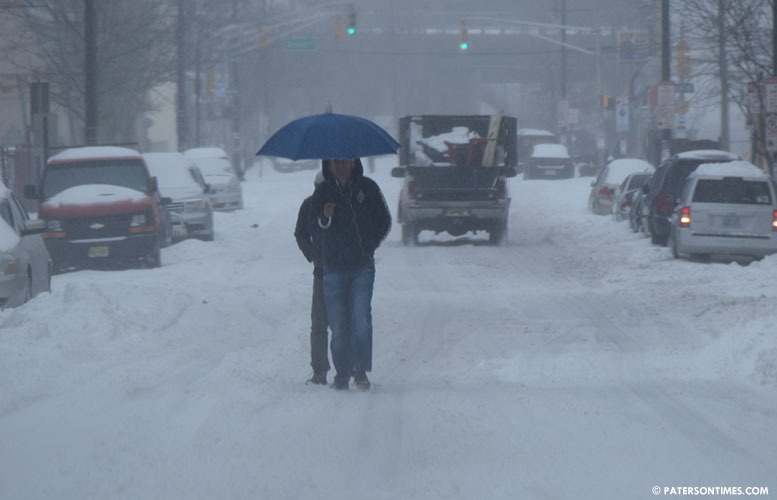 The city spent $178,715 on mostly outside contractors and public works employees to clear the roadways in the mid-March snowstorm – called the biggest snowfall of the season, according to a report mayor Jose “Joey” Torres’ administration provided to council members.

Much of the money — $105,500 — was spent on four outside contractors, according to the report. The city paid $26,756 to its employees and spent $33,846 on salt. It spent $5,651 on fuel. Police collected $4,747 and the Office of Emergency Management under the fire department spent $2,715 in the snowstorm on mechanics overtime, vehicle repairs, and other expenses.

Council members were provided the report at the end of Tuesday’s meeting. Council president William McKoy said his colleagues did not have enough time on Tuesday night to delve into the snow removal expenditures.

“The roads were terrible. The roads were in bad shape,” said McKoy. He observed public works employees doing hard work, but without the right equipment, he said. The city spent $83,400 on Jersey City-based Doing It Right Tech (DIRT) for 20 tri-axel trucks, 3 trucks with plow, and 20 additional trucks, according to the report. It also used 5 payloaders from Hackensack-based Colonnelli Brothers for $13,950 and 2 payloaders from Paterson-based American Hose and Hydraulics.

The report states the city paid $1,800 to Prospect Park for its SnoGo truck. “That was the most exciting thing I saw in the whole process,” said McKoy of the machine from neighboring Prospect Park.

Some council members have had expressed concerns about spending on contractors. Councilman Michael Jackson for example thought the snow removal could be handled by city employees who live and work in the community rather than sending the money outside of the city via contractors.

Public works director Manny Ojeda did not return a call for comment on Wednesday.

Even though the city used contractors for the snow emergency, the services rendered to residents were mediocre. Municipal roads were in bad shape two days after the storm leading the Paterson Public Schools to declare a snow day on third day after the massive storm struck the city.

Maritza Davila, chairwoman of the public works committee, who is tasked to provide oversight of the department, did not respond to a message for comment.

McKoy thought the administration should have presented the report earlier in the meeting on Tuesday night to allow for a better discussion in the council on the expenses. He said he does not have a comparison point to figure out whether the expenses incurred is too much or too little for the job.

Luis Velez, 5th Ward councilman, demanded the report during the early part of the meeting. However, the meeting that occurred on Tuesday night was a rowdy and rancorous one due to the presence of a no confidence vote measure on the agenda that attracted large numbers of speakers to the council chambers and ate up much of the meeting time.

Both McKoy and Sayegh noted the city’s public works employees do not have the needed equipment to properly clear the roadways after a storm.

“We all can agree we don’t have enough equipment and the department is not properly sized,” said McKoy. He proposed expanding the department to include garbage pickup. He has suggested equipping the trash pickup trucks with plows in the winter.