Mayor Jose “Joey” Torres administration is prepared to award a $1,485,725 contract for the rehabilitation and restoration of the front of the historic Hinchliffe Stadium. This would represent the first phase of construction on the road to fully rehabilitate the stadium, said officials.

Gianfranco Archimede, director of Historic Preservation Commission, said the work includes restoration of the wall on the Liberty Street side including façade, ticket windows, terracotta tiles, entrance gates, and other decorative features.

“This will give a portion of the stadium a great facelift as a demonstration of the larger lift in phase two,” he told council members on Tuesday night.

Four cast concrete Hinchliffe Stadium signs will also be restored as part of the work.

Council members are expected to consider awarding the almost $1.5 million contract to Mount Laurel-based Wu & Associates which was the lowest responsible bidder for the project, according to the city. 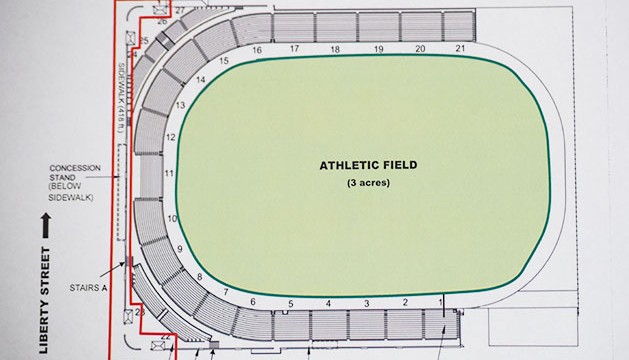 Diagram highlights area designated for restoration in phase one.

Two other firms vied for the contract. G.L. Capasso of New Haven, Conn. wanted $1.54 million to undertake the project. C&D Restoration of North Bergen wanted $1.8 million to handle the work, according to city records.

“What’s next after the first phase? My concern is this property doesn’t get vandalized,” said Alex Mendez, councilman at-large. The contract includes security measures such as fencing for the entrance area, said Archimede. He said after phase one is two which is a far bigger construction project.

“This is a project close to my heart. I’m all in favor,” said Michael Jackson, 1st Ward councilman. However, he questioned the amount of money the city has spent to conduct various studies.

The city spent almost $1.5 million on planning, engineering, market studies. Archimede explained the studies produced a manual for restoring the stadium. He said the contractors conducted geotechnical studies of the structure by taking various samples. Studies also produced the phase one construction and design documents.

Archimede noted the city also recently received the business plan for the stadium that was the product of another study. One of study contract also covers construction administration for the stadium, he said.

“It’s just a large amount,” said Jackson. He represents the 1st Ward where the stadium is located. Other council members were worried about borrowing money to fund projects.

“We continue spending down on our credit card,” remarked Kenneth Morris, councilman at-large. He mentioned the $2.6 million bond ordinance before the City Council seeking the approval of the state to borrow funds for Hinchliffe Stadium work.

“We’re already one-third of the way in spending the $15 million the public gave approval for this project,” said Morris. City voters agreed to borrow $15 million to restore the stadium in a referendum in 2009.

Morris’ concern was not targeted towards the stadium alone. His criticism targeted the administration and its tendency to borrow large sums of money for projects. He said as the city continues to borrow without creating new revenue streams it will exhaust its borrowing capacity and have problems cover unforeseeable future expenses.

There was a general frustration among council members about the time it is taking to restore the stadium. Ruby Cotton, 4th Ward councilman, expressed frustration at approving various contracts for the stadium, but not seeing actual construction.

“Wow,” said Velez. He thought it would be cheaper to restore the stadium. He cited Boverini Stadium in Passaic City which was renovated with $4.9 million. However, Paterson’s stadium is historic which costs much more to renovate, said officials.

“We won’t be able to make anything of Hinchliffe Stadium unless we start somewhere,” said business administrator Nellie Pou. Archimede noted $800,000 of the first phase of construction is being covered by two grants. The rest is being picked up by the city. This is the first significant rehabilitation project at the stadium, a result of the various studies, to be undertaken in more than 20 years.

Advocates for the stadium see the restoration of the stadium as key to revitalizing the north-western part Paterson. Brian LoPinto, president of the friends of Hinchliffe Stadium, said the stadium and the Great Falls will be instrumental to economic growth in the Totowa section of the city.

LoPinto said restoring the front portion of the stadium will likely attract private investors. “In doing this little bit will probably show third party investors they might want to invest in this,” he said on Wednesday morning.

The stadium opened in 1932 and closed due to sinking and destabilization of the field in 1997. It is one of the few remaining stadiums where the legendary Negro League held baseball games. The stadium was made part of the Great Falls National Historical Park by the U.S. Congress in December 2014.

LoPinto noted the more than half of the first phase being funded by grant money as a positive. “That’s a pretty good savings,” he said. He urged council members to look to the future of the city and the benefit a restored stadium — which is owned by the Board of Education — will have on the city’s economy and not to make the same mistake of their predecessors.

“When you talk about projects of this magnitude, it’s not about the short-term effect on Paterson. It’s about what is Paterson going to look like in 20 years,” said LoPointo. “In 1997, no one looked to Paterson in 20 years which is now. Imagine if the smaller monies were spent then; we’d still have a full functional stadium.”

Council members will take action on the contract at their regular meeting on April 11th, 2017 at 7 p.m. in City Hall.