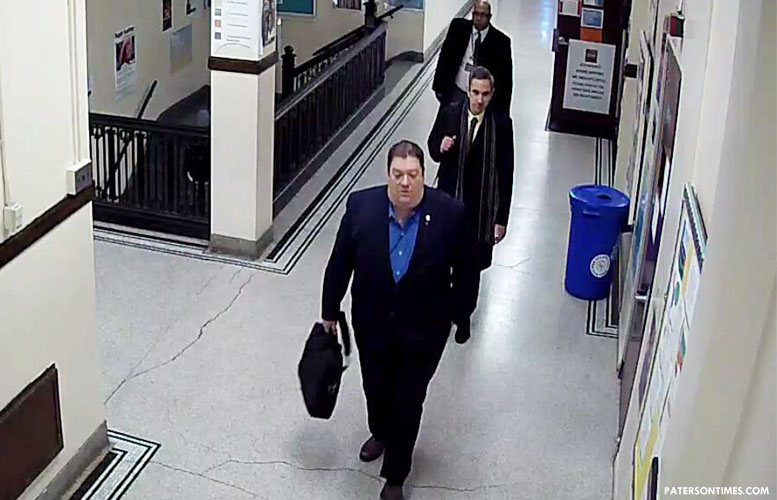 The dispute between the vice-principal of Napier Academy and the teachers’ union president took a bizarre turn when it spilled into the hallway. After he stepped out of the office and into the hallway, John McEntee, teachers’ union president, appears to taunt Sharon Davis, vice-principal, by blowing a kiss at her, reveals surveillance footage obtained by the Paterson Times through an open records request.

Surveillance footage also raises new questions about McEntee’s claim that he was “forcibly ejected” by security from the Frank Napier Academy building on December 19th, 2016. Footage show McEntee, Sasha Wolf (pictured, middle), and Charles Ferrer entering and exiting the building after the dispute without intervention from school security.

McEntee referred all questions to his attorney Sanford Oxfeld. “I don’t talk about cases when I’m in litigation,” said Oxfeld when contacted via phone for comments on Friday morning.

The district has filed tenure charges against McEntee seeking his suspension. He is accused of two separate counts of conduct unbecoming, according to documents the district submitted to the New Jersey Department of Education. The first count is because he “verbally and physically intimidated” Davis with his “threatening conduct.” The second is for “falsely” stating he was “forcibly ejected” from the school by security.

State-appointed district superintendent Donnie Evans in communications to staff members has said he is seeking McEntee’s suspension. The district is not seeking revocation of his teaching license, his memo to staff states. The union chief has been placed on unpaid suspension. He will be entitled to backpay if he is successful in defeating the charges.

McEntee has said Evans is targeting him for his fight to protect teachers’ rights.

McEntee has maintained the incident that occurred inside the principal’s office is “protected union activity.” He has the full support of the 3,000 strong teachers’ union who held demonstrations minutes before the Board of Education certified tenure charges last Monday. Teachers have criticized Davis for her alleged heavy-handed tactics. She has been known for giving teachers poor evaluations. Her reviews put 20 teachers on corrective action plans when she was at School 21, according to the union.

After 11 years of working in the district, Davis left for a higher paying job at the Hoboken Public Schools last Thursday. A scarcely attended farewell ceremony organized by the school’s principal Marc Medley demonstrated the little support she enjoyed among the people she was tasked to supervise.

The district does not have cameras inside the vice-principal’s office which forces reliance on eye witness testimonies to determine what occurred in that dispute which lasted less than five minutes.

Irene DelRosso, supervisor of federal programs at the district, and Sasha Wolf, a field representative for the New Jersey Education Association, were the two eyeball witnesses to the encounter between Davis and McEntee.

DelRosso’s testimony to the district’s internal investigators stated McEntee and Wolf knocked on the vice-principal’s office door. Davis was asked if she was busy; she replied she was, but welcomed the two men inside.

Davis invited them to sit down. McEntee refused. He walked around Davis’ desk close to where Davis was sitting. He began to question her about a confidentiality clause she used in her emails to teachers. He asked her if she sent a particular email; Davis replied she would have to look into it, according to DelRosso’s testimony.

DelRosso’s testimony captures some of the exchange between the president and vice-principal.

“I have an email that you sent,” McEntee said.

“Why are you asking me if you know the answer?” replied Davis.

“You can get whomever you want!” McEntee told Davis. Davis told him she wished he would have told her before the meeting this was about a grievance.

McEntee became “visibly agitated.” He became louder and started to wave his finger at Davis’ face. He was 12 inches from her face, according to DelRosso’s testimony.

“We are done here. Please leave my office and the school,” Davis told McEntee. McEntee replied he wasn’t leaving. “Who do you think you are?” McEntee asked her, according to DelRosso’s testimony. “You can’t make me leave.”

Davis dialed security; McEntee began to walk out, according to Davis’ testimony to the district.

“Are you here for me? Did she call you?” asked McEntee when he approached the vice-principal’s office, according to the security guard’s testimony.

“I don’t know why I’m here. I have to ask her,” replied Benjamin, according to his testimony. He appears to shrug his shoulders when McEntee speaks to him in the surveillance footage.

As the three men were in the hallway, a union representative, Javier Fresse, a teacher at the school, stopped to speak to them. His students were running and rolling on the floor while he was speaking to McEntee.

“I was just verbally attacked by that PEA president John McEntee and I want them out of this building,” Davis told Benjamin. The security guard was caught in an awkward spot to make a judgment between his boss at the school and his union chief.

The three men were on their way out.

Benjamin exited the vice-principal’s office, saw them on the stairs, and then he slowly proceeded downstairs. He went behind his desk. He appears to have not made any conversation with any of the three men.

Wolf did not provide any substantive testimony at the district’s request; Davis’ testimony largely matched with that of DelRosso’s. Davis also made four demands; she wanted McEntee removed as union president, a written apology to her, a written apology to the district for his email that said she removed him from the building, and supervision at future meetings with him.

Davis also sought security escort to and from the school building which was provided to her. She also filed a police report of the incident.

McEntee’s testimony states it was a “very heated exchange.” His written testimony states the vice-principal “prematurely terminated” the discussion about the email clause and “forcibly ejected” the three men from the building using security.

The surveillance footage shows neither of the three men were removed from the building by security. The footage also shows as the dispute volume increased, Ferrer, who remained at the teachers’ lounge next door, approached the office after hearing a “commotion.” As he approached Wolf and McEntee were on their way out.

The dispute was heard by staff at the teachers’ lounge. Some have reported both Davis and McEntee were engaged in a verbal argument.