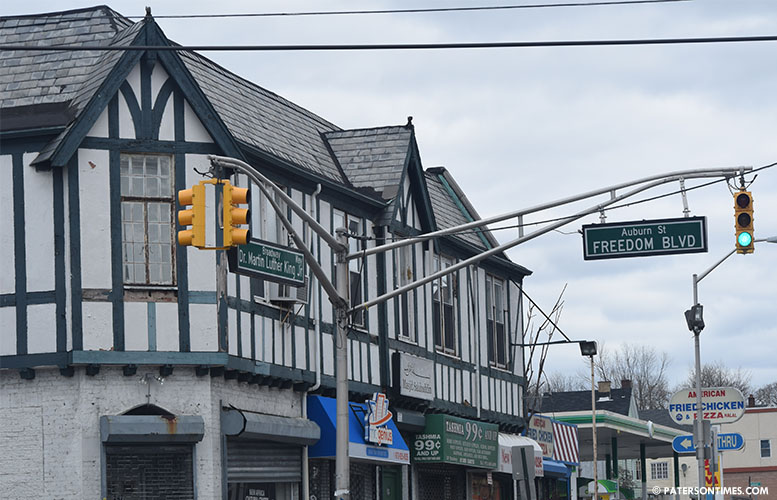 The city’s redevelopment plan for the 4th Ward designates an area in front of the Danforth Memorial Library as a “Makerhood,” a planning concept that seeks to foster small businesses by allowing urban entrepreneurs to mix living and workspace.

John Barre, planner for the city’s Red Bank-based consulting firm Heyer, Gruel and Associates, said Broadway between Straight and Carroll Streets will be designated as a work and live “overlay.” The proposed “Makerhood” goes far deeper behind Broadway to 12th Avenue.

“That allows for affordable smaller units where there’s workshops and workspace integrated directly with residential units. It’s an older model, people working out of their homes, but it’s coming around again and there’s opportunity for some growth and development, kind of an incubator to get businesses off the ground,” said Barre.

Area in the 4th Ward in black stripes designated as a “Makerhood.”

Council president William McKoy thought it an interesting concept and sought specific examples of similar developments elsewhere in the country. He also inquired about the types of businesses that can make use of such a mix space.

Barre said it will allow for small scale manufacturing, technology startups, and other computer related business. “The idea is to provide people who may not be able to afford traditional office or workspace to combine their home to take down some barriers that divide commercial and residential spaces,” he said.

The concept is a relatively new one that has mushroomed in some of the British Commonwealth countries. There’s a “Makerhood” in Brixton in England that was setup in 2010 to encourage creative types to setup businesses by exploiting their skills to make products like art prints, paintings, cards, clothes, homeware, and jewelry. There’s also a “Makerhood” in Auckland, New Zealand which promotes a “culture to tinker, to fix, to create.”

In 2014, a New York-based organization Makerhoods brought the idea to the United States. This group is touting the idea as a way to promote self-sufficiency in poor urban areas to battle poverty. This group has been pushing for “Makerhoods” in Jersey City and Newark. It has held meet-ups in Jersey City, Newark, Perth Amboy, and Paterson, according to its website.

A representative for the organization did not respond to a call for further information about the concept in the United States and whether there are any successful examples of it.

The council president said the mix of work-living could create a new set of problems. He said it could lead to noise and other complaints.

Both plans promote population density in the city. For example, the city’s redevelopment plans for the three poorest wards 1st, 4th, and 5th allow houses to be built on lots 25×100. A standard lot for a house in Paterson is 50×100. Michael Deutsch, director of planning at the city, said the city sold irregular sized lots to developers. For those lots, the city reduced the requirement to allow houses on smaller lots.

Ruby Cotton, 4th Ward councilwoman, said that’s the reason why many of the newly built homes on Godwin Avenue do not have backyards. “Those houses have no greenspace or nothing,” she said. She wanted the usual 50×100 lots for houses to allow for backyards.

Morris also criticized the plans for 80-percent impervious surface area. Impervious surface consists of parking lots and other paved surfaces that do not trap water. He said this just forces rainwater into the city’s combined sewer system at a time when there are organizations working to reduce the flow of rainwater into the sewer system to prevent sewage from flowing into the Passaic River.

Deutsch explained houses could have seepages pit to capture rainwater and then slowly release it underground. This will just drive up cost to construct a building, said Morris.

Both redevelopments will be considered for approval tonight by the council.