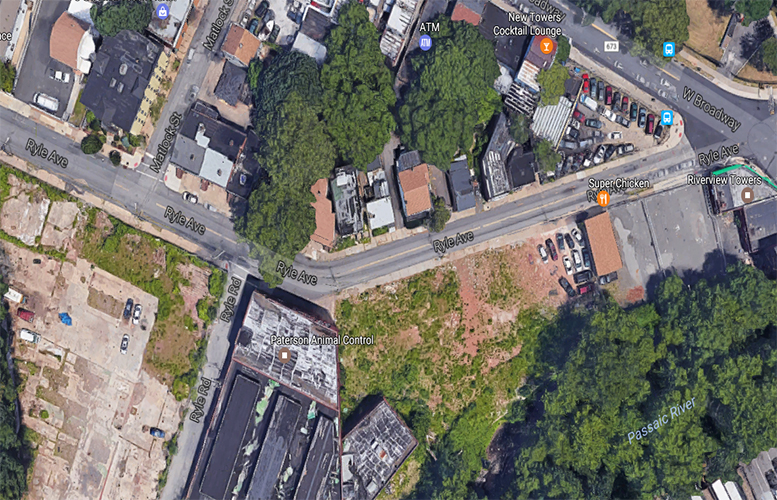 A plan that seeks to acquire 15 ramshackle properties in the Ryle Avenue area using $2.5 million in state Green Acres funds to create a new entrance to the Great Falls National Historical Park from West Broadway has been approved by the City Council.

Council members voted 7-2 to approve an application to the New Jersey Department of Environmental Protection (DEP) Green Acres Program last week seeking the funds to acquire and demolish the properties and convert the area to open space.

Some council members asked questions about the loss of tax revenue from demolishing the dilapidated structures.

Properties the city is seeking to acquire using $2.5 million in state grant funds.

“How exactly do we expect to replace those ratables?” asked Michael Jackson, 1st Ward councilman. “How is making that area green space generate revenue for the city?”

Gianfranco Archimede, director of the Paterson Historic Preservation Commission, and Ruben Gomez, director of the Economic Development Department, both indicated the new entrance to the Great Falls will attract businesses to the 1st Ward area giving a boost to the local economy.

Kenneth Morris, councilman at-large, asked for numbers. He wanted to know the amount of ratables and tax income the city will lose.

“I need to understand what the risks is,” said Morris. Gomez did not have the tax ratable loss or the revenue loss information for the councilman.

The city will lose $2.9 million in ratable by demolishing the properties, according to an analysis of the city’s tax assessment data on the 15 lots. This translates to a loss of $126,959 in tax revenue to municipal coffers.

5 of the 15 properties on the list are delinquent in paying taxes, said Gomez. Citing low assessments of buildings on Ryle Avenue, mayor Jose “Joey” Torres said, there’s very little loss in revenue from acquiring and demolishing the properties.

Morris also asked questions about the prices the city will pay to owners to acquire the parcels. He said the properties will cost less than their assessed values because of their poor state.

“Someone’s going to have a windfall,” said Morris requesting a list of owners to benefit from the acquisition of their properties in a deep flood zone.

The properties are mostly owned by out-of-town individuals and firms, according to tax records. The biggest beneficiaries are likely to be property owners whose properties have the highest assessed values in the area.

44-48 Ryle Avenue has an assessed value of $1.25 million. The property is owned by United Development of America LLC which is owned by a Bashar Sabbagh of Hackensack.

103-105 West Broadway is assed at $223,000 and is owned by 25 Lake Street LLP, a firm owned by John Fressie, a politically connected real estate developer in the city.

Acquiring and demolishing one property puzzled Ruby Cotton, 4th Ward councilwoman. She wondered why the city was looking to acquire the old Kanas Fried Chicken spot next to the river. Torres said the long-abandoned chicken joint will be demolished and made into greenspace.

One property not being acquired is the red building next to the Passaic River. Archimede said a developer has agreed to rehabilitate this property.

Other council members thought the project is a worthwhile one that will improve an area that has suffered from neglect.

“Making the entry point more desirable is a worthwhile investment,” said Andre Sayegh, 6th Ward councilman. “People get hungry and thirsty. There’s not many options.” He said the loss of revenue from the properties taxes will be “negated” by a boom in businesses geared towards serving visitors to the national park.

“All of us should visit Ryle Avenue. That area has been neglected for years. I think this project brings some light to the area. It will beautify the city,” said Shahin Khalique, 2nd Ward councilman.

There were some that were indecisive about the plan to convert the area to open space. Alex Mendez, councilman at-large, passed during the vote allowing Luis Velez, 5th Ward councilman, to poke fun at him.

Mendez like Jackson and Morris had questions about the possible loss of tax income for the city. “We don’t know how much revenue we will lose,” he said.

City resident Frank Blesso opposed the plan to acquire the lands citing the requirement which calls for the space to be designated as open space. He said this will limit development in the area. He suggested acquiring the land using federal community development grant funds. Others disagreed with him.

“I think this is a good idea. I think it’s in the long-term interest of the city,” said Bob Guarasci, a member of the Great Falls federal advisory commission.

The new entrance is a “natural” fit for the area given the heavy car traffic that pass through West Broadway from Wayne, Haledon, and West Milford on a daily basis, said the mayor.

Close to 50,000 cars move through West Broadway, said Torres citing a five-year-old study. “If we were to take a traffic count of Spruce Street and McBride and West Broadway you’re going to see West Broadway probably out beats them all,” said Torres. “It’s the most traversed road in the City of Paterson.”

Jackson said the city needs to do more to address the heavy traffic on West Broadway. Jackson and Morris were the two votes against the application.

The city will hear back on the $2.5 million request by the fall of this year, said officials.