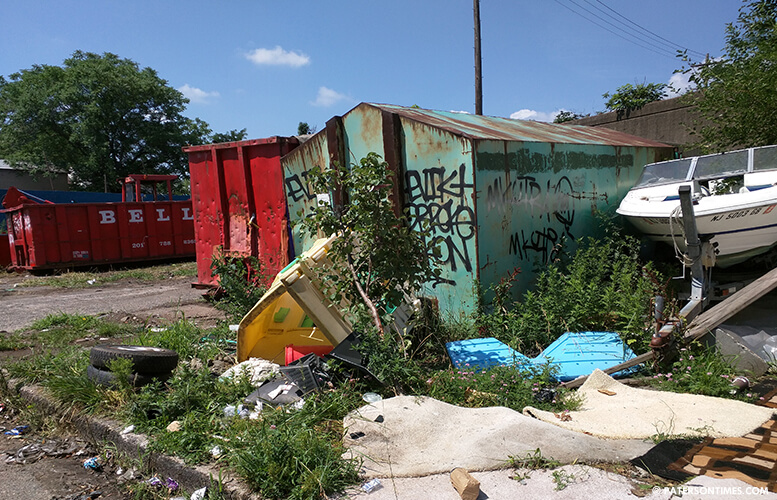 The owner of a dumping site on Summer and Keen Streets appeared in front of a judge at the Clifton Municipal Court on Monday morning to answer for 14 summonses issued by city inspectors.

Ellen Heine, who owns 28 Summer Street, a lot used for dumping, attempted to get the court hearing adjourned. She requested an adjournment for her case, but the court refused to grant it. She requested the same in front of judge Thomas Brunt. She argued she has a case pending against the City of Paterson in New Jersey Superior Court which has to be resolved first before this case can move forward.

Heine urged the judge to hold the case in “abeyance” until the superior court case is resolved.

“Not going to happen,” replied Brunt. He said her reasons for adjournment is “vague.” City officials have had a hard time prosecuting Heine for allowing her property to be used as a dumping site.

Some of the summonses are three years old. The summonses were issued between 2014 and 2016. Since then, the city has issued more tickets for continued dumping at her property. Less than a month ago, public works employees had to clean up her lot following complaints from senior citizens living across the street.

Heine, who is representing herself in the case, requested a sidebar with the judge, but was rebuffed. “I don’t have sidebars with pro se defendants,” said the judge. He urged her to hire an attorney given the seriousness and large number of alleged ordinance violations.

“If somebody accused me of that I’d hire a lawyer and I am a lawyer,” Brunt told her. She told the judge she intends to represent herself.

The judge read the 14 violations issued against her. The violations include failure to fence the property, having boats on the site, having unregistered vehicles on the lot, among a litany of alleged violations.

Though the judge refused to grant her an adjournment in the case, he told her holding this case in “abeyance” is outside his jurisdiction. He granted her time to file in the superior court. The judge did not set a future hearing date on the 14 summonses.

Two inspectors from the Community Improvement division appeared in court. A third inspector, Tyree Balmer, who has left the city for a higher paying job in Englewood, also appeared. Balmer issued majority of the tickets against Heine as part of the city’s effort to crackdown on illegal businesses and other alleged violators.

The case was moved to Clifton for a potential conflict of interest due to Heine’s lawsuit against the city.