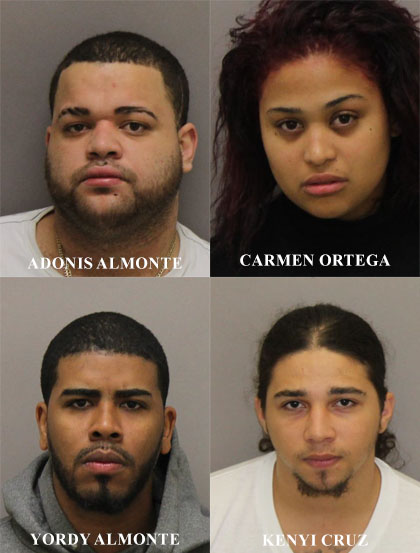 An off-duty detective from the Harrison Police Department chased four people after the suspects fired at a car that had a woman and her 9-year-old daughter, according to new information released by the Passaic County Prosecutor’s Office on Monday afternoon about the police-involved shooting on Oak and Madison streets late last year.

Ortega, Yordy Almonte, and Cruz were also charged with resisting arrest by flight. Authorities said the three men and woman were inside a vehicle on Cedar and Lewis streets in Paterson at around 10:30 p.m. on Friday, October 14, 2016. One or more of the suspects fired at a car that had a woman and her 9-year-old daughter.

Detective Frank Narvaez of the Harrison Police Department was in the area visiting his relatives. He began to chase the suspects’ vehicle. One or more of the suspects began firing from the car at the detective on Madison Street.

The suspects’ vehicle crashed into a corner house on Madison and Oak streets, but they continued to fire at Narvaez. The detective began firing back. Ortega, Yordy Almonte, and Cruz fled the scene. Adonis Almonte was located at the scene.

Narvaez did not suffer any injuries. His use of force was justified, determined a grand jury.

Adonis Almonte was treated for non-life threatening injuries to his knee. Police seized a semi-automatic pistol and a revolver from the suspects’ vehicle. The pistol was reported stolen, authorities said.

Authorities said all four are being held at the Passaic County Jail. Three of them have been arraigned and Cruz is scheduled for arraignment on May 8, 2017.