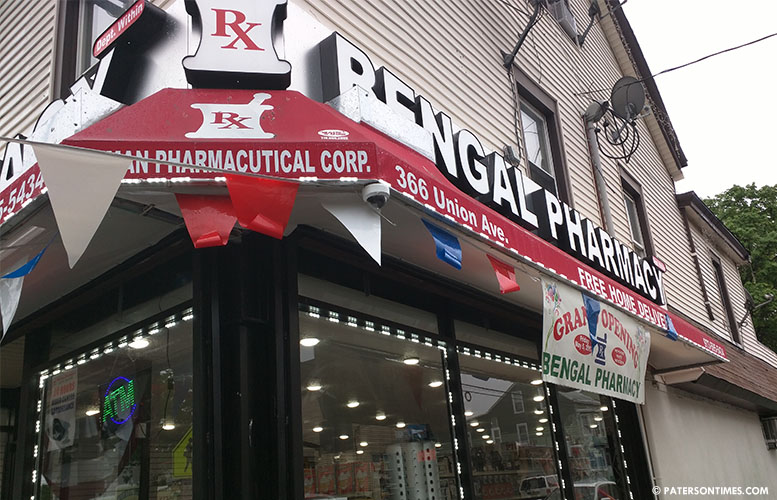 The city’s newest pharmacy touted as the first by the growing local Bangladeshi-American community opened on Union Avenue on Friday afternoon.

Mohammad Kamran Hussain, co-owner of the Bengal Pharmacy at 366 Union Avenue, said the pharmacy located mid-way between the Totowa and Hillcrest sections is targeting the growing Bangladeshi-American community in both neighborhoods.

There are a number of pharmacies in both neighborhoods. On Union Avenue alone there are two other well-established drug stores. He said this will be the first one to be able to provide dosage instruction written in Bengali.

“There is no community pharmacy,” said Hussain, an accountant. When told there are other pharmacies serving the local community, he said, “Still we want our own. Our community wants to go where they are comfortable.”

Hussain said the pharmacy in the heart of the local Bangladeshi-American communicate will have Bengali speaking staff to communicate in their native tongue and fulfill their prescription needs. His business partner, Sarwar Chowdhury, who is the other co-owner of the business, has experience running a pharmacy.

Chowdhury owns a pharmacy in Ozone Park in Queens, New York. New York City has the largest Bangladeshi-American community in the United States, he notes. The number of residents of Bangladeshi heritage is estimated to be 15,000 to 20,000 in the Silk City.

When asked what made him cross the Hudson River to open a pharmacy in Paterson, Chowdhury responded: “I have family here. I have relatives here. There’s so many mosques around here, there’s so many people — every time I ask them where do you go for your medicine? Their response is, ‘A lot of places.’”

Chowdhury’s anecdotal research revealed the newcomers to the United States were having difficulty communicating when getting their medicine from other pharmacies. Local pharmacies have been accommodating the growing Bangladeshi-American community; for example, McDermott Pharmacy has hired staff able to communicate in Bengali.

“I can write the directions on the label in Bengali. They cannot,” said Chowdhury, who lives in Queens. Hussain, who lives in Long Island but has family in Paterson, said this is an advantage this pharmacy has over the others in the area.

The pharmacy will also provide other services aimed at the growing immigrant community. Golam Chowdhury, who will operate a remittance operation out of the building, is hoping to make the pharmacy a one-stop shop for medicine and for sending money back home, he said.

The partners have entered into a 10-year lease agreement and are in it for the long-haul, both said. Chowdhury said he ran a discount shop out of the storefront that now will be occupied by the pharmacy at the corner of Union and Wayne Avenues.

Six jobs have been created by the pharmacy, said Chowdhury. He said 4 of them were filled by local residents and 2 by nonlocals.

The pharmacy is located in the 2nd Ward.

“We have everything in this community to make it self-sustaining. We never had a pharmacy. This is the first Bengali pharmacy,” said Mohammed Akhtaruzzaman, former 2nd Ward councilman.

Both Akhtaruzzaman and Khalique hail from the Bangladeshi-American community. Akhtaruzzaman made history in 2012 by becoming the first from his community to win a city council seat.

The Bangladeshi-American community has become a powerful political force in Paterson. Voter turnout for the group is much higher than those of other ethnic groups and local politicians actively seek out the group’s support. The group is part of the bigger Muslim community in Paterson which includes Arabs, Turks, and others in South Paterson.

The organizer of the grand opening tread a fine line in inviting both the former and current councilmen. The two men are embroiled in a court battle over who should represent the 2nd Ward. The owners of the pharmacy also received good luck wishes from mayor Mohamed Khairullah of Prospect Park and councilman Anand Shah of the neighboring town.

“We’re depending on our community,” said Hussain. He said the pharmacy is offering 15-percent off vitamins and giving senior citizens 10-percent discount.