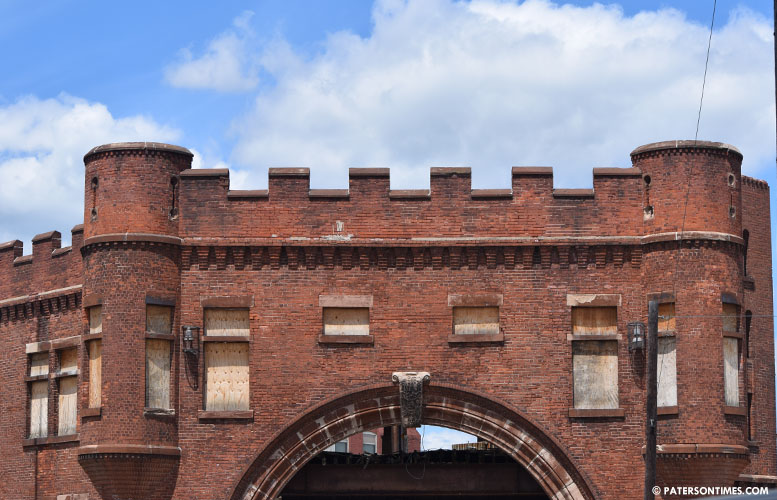 The city council refused to approve $900,000 to rehabilitate the remaining portion of the Paterson Armory on Tuesday night. Mayor Jose “Joey” Torres’ administration sought to borrow $857,142 with $42,858 in down payment to rehabilitate the building on Market Street.

Council members rejected the borrowing measure in a 7-1 vote. Luis Velez, 5th Ward councilman, was the sole vote in favor of borrowing the funds to rehab the remains of the structure built in 1889.

Velez argued the structure, which sits in the 5th Ward, has to be rehabilitated.

“It desperately needs to be closed, protected, and buttoned up. We’ve gone through the effort of saving it, scrape out the debris, and leave it as a shell so we can get to this point,” said Gianfranco Archimede, director of the Paterson Historic Preservation, to the council.

Archimede said the remaining administration portion of the building that fronts Market Street has a basement, first, second, and third floor. It can house 15 to 18 large classrooms or offices.

This project will give a basic “rough out” of the interior to determine what the future use of the building will be, said Archimede. Plumbing, HAVC, and other remediation that needs to be done inside will be made available as part of this project, he told the council. He said the “fit-out” will occur when other agencies rent space from the city; those agencies would be responsible for the fit-out.

“It’s nearly a million dollars to buzz it up, but it’s still not ready for use,” said council president William McKoy. “A million dollars on a project only to get it ready to be outfitted is not something we can afford to do. We need to know where it is we’re going.”

McKoy thought the school district should consider making use of the building for use as classroom space. Alex Mendez, councilman at-large, agreed with the council president’s suggestion. The district showed little interest in using the building even before the late 2015 fire that destroyed much of the structure.

Ruby Cotton, 4th Ward councilwoman, said in the late 1990s there was some talk of using the armory as a recreation center for Eastside High School, but there was no interest from the state government, which runs the school district, in making the investment to rehab the armory.

The Paterson Parking Authority had plans to rehab the structure to turn it into a sports complex. As late as early 2014, there was some effort by the city to try to clean the contamination inside the massive building.

The drill hall area that has been demolished after the fire has the potential for residential and commercial development, according to officials.

Council members Maritza Davila and Shahin Khalique at first appeared to support the borrowing measure, but a crowd hostile to borrowing for the armory appeared to have pushed them in the other direction.

“Where do we start? We have to start somewhere,” began Davila. She ended with, “We need a more clear, precise description of where the money is going to.” She and other council members were provided details of expenditures and details of work to be completed at the building.

Economic director Ruben Gomez provided council members a document that detailed the expenses and the work to be done last week.

“We got to start somewhere,” Khalique echoed Davila’s words. “I see a proposal here and I see a breakdown, but I don’t think this $900,000 is enough.”

Khalique at first complained about having not seen the details of the project. Business administrator Nellie Pou handed him the same document council members received the week prior.

Davila and Khalique voted against by stating they needed to see specifics of where the money would be spent and what would be done while McKoy, Cotton, and Mendez voted against citing lack of post-rehab usage plan for the abandoned structure.

“The concern we’re trying to address now is we have a shell of a building that is very vulnerable to continued deterioration and [could] very quickly become a public safety hazard,” said Archimede.

The Paterson Armory was last used by the military in 1983. It sat unused after 1990. The city did not make any significant investments in the building prior to the fire. It was forced to spend $1.1 million for emergency demolition and stabilization to preserve the front portion of the fire ravaged structure.