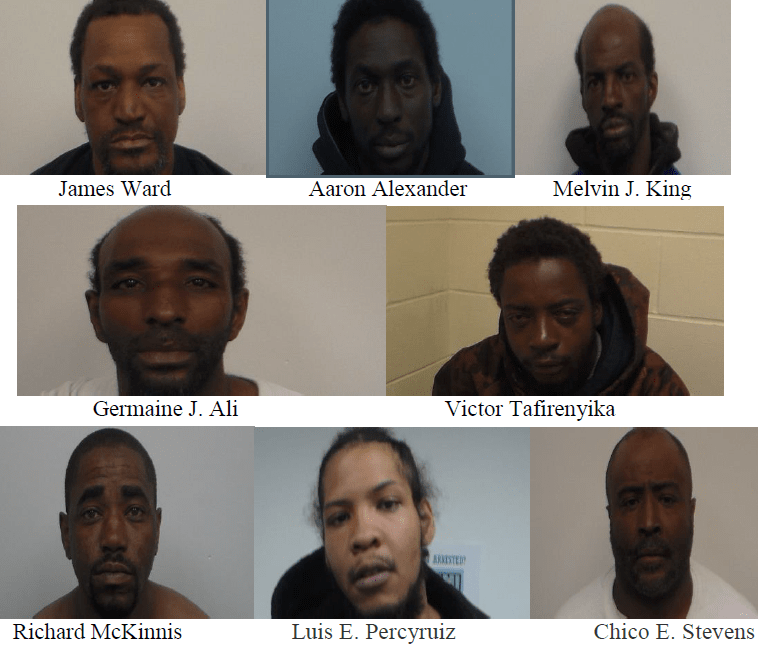 Eight people were arrested in a sweep of Lou Costello Park in Paterson on Monday after authorities connected 70 non-fatal synthetic marijuana overdoses that occurred in a 48-hour span in Newark to dealers at the park, according to the Passaic County Prosecutor’s Office.

Authorities from Essex and Passaic countries conducted a surveillance operation at Lou Costello Park to identify and arrest buyers and dealers of synthetic marijuana known on the street as K2 and Spice.

Authorities have filed for pre-trial detention of King, Ali, Percyruiz, and Stevens. The others have been released and their cases referred to a grand jury.

Police in Newark started investigating the overdose cases after seeing several individuals having negative reaction to ingesting synthetic marijuana in the surrounding area of the Newark Penn Station.

Last week, in a span of 48 hours, there were 70 synthetic marijuana overdoses in Newark that was tied to supply from Paterson, authorities said. Investigators determined synthetic marijuana from Lou Costello Park in Paterson was being transported to Newark for distribution within the Penn Station area.

Ward, Alexander, King, Ali, and Tafirenyika face a maximium of 18 months in prison and McKinnis, Percyruiz, and Stevens face a maximum of more than six years in prison, authorities said.