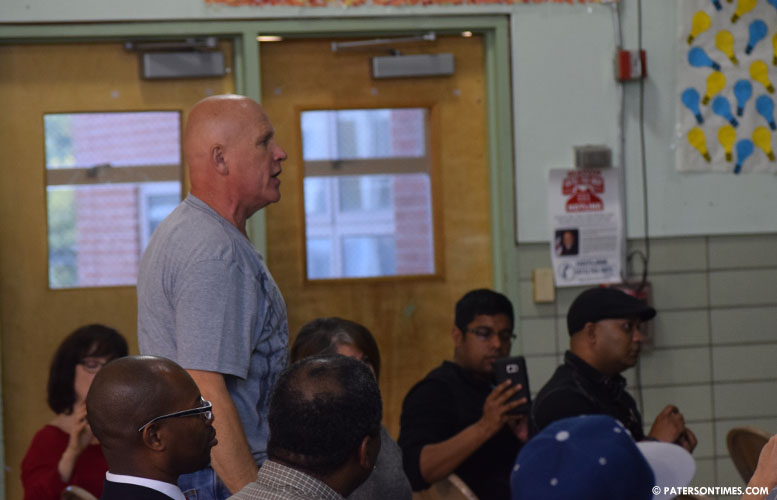 Mayor Jose “Joey” Torres was heckled at the first of a series of town hall meetings on Wednesday evening when a longtime city resident shouted at him calling the three-term mayor a “disgrace to Paterson.”

“You’re a disgrace to Paterson!” shouted Jan Thomas, a lifelong resident of the city, at School 27, as the mayor touted his accomplishments of the past almost three years.

“Who invited you!” Torres shouted back.

“I invited you!” Torres barked.

Torres threatened to use police to remove Thomas from the meeting.

“I can take the heat,” replied Torres.

Police director Jerry Speziale and acting police chief Heriberto “Eddie” Rodriguez intervened cutting the interaction short. Both told Thomas he would have a chance to ask his questions at the end of the mayor’s presentation.

Torres filled much of the 2 hours and 20 minutes town hall meeting with presentation segments from his cabinet members.

Thomas was allowed to speak at the conclusion of the mayor’s presentation. He continued his attack on Torres.

Thomas suggested the indicted mayor resign from office. Torres has been indicted on theft and other corruption charges for allegedly using public works employees to handle renovation work at a warehouse leased by his daughter and nephew. He pleaded not guilty to the charges against him.

“In this country, everyone is innocent until proven guilty,” replied Torres. “I’ll have my day in court.”

Torres’ town hall meeting was attended by less than 25 city residents. With the inclusion of municipal government employees, the audience swelled to 45 people or so inside the gymnasium of School 27.

Half-dozen residents asked the mayor various questions. Some of the concerns raised at the meeting were about loud parties.

Rodriguez told the audience he had a plan to tackle the quality of life problems in the city without providing any details. When approached for details, Rodriguez said he was not giving interviews.

The city has a perennial problem with loud music particularly during the summer. Council members have urged the police director to reinstitute a detail to target violators. On Tuesday night, council members Maritza Davila and Shahin Khalique complained about the loud late night parties at the dead end of Sheridan Avenue off of Crosby Avenue in the 2nd Ward.

Rodriguez claimed to have addressed the Sheridan Avenue illegal block party problem. “It’s been a ghost town,” he told Khalique and Davila, both of whom participated in the town hall. “We’ve been doing things different.”

The mayor continues his series of town hall meetings tomorrow at 5 p.m. at School 26 (1 East 32nd Street; 3rd Ward). He will have one meeting in each of the six wards.

The rest of the scheduled meetings are as follows: