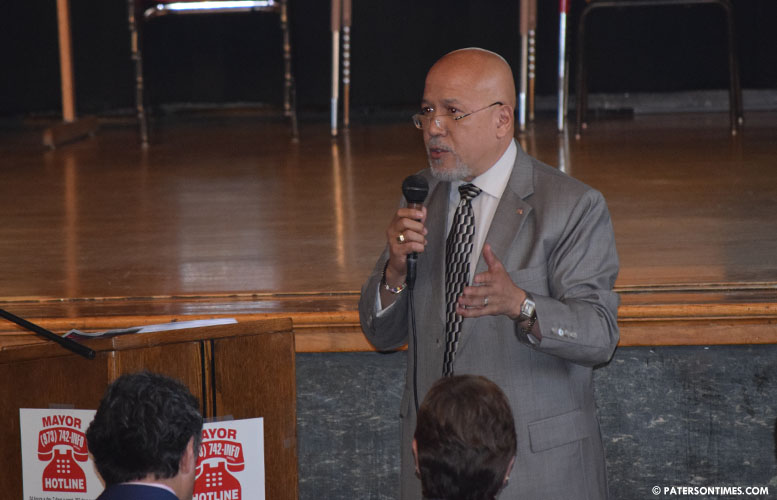 After receiving rough treatment at his first town hall meeting in the Hillcrest neighborhood, mayor Jose “Joey” Torres faced a much friendlier audience at the School 26 auditorium on Thursday evening.

Torres fielded a dozen questions from residents of the 3rd Ward. He was bombarded with questions dealing with deteriorating quality of life in the area.

Esme Harris, 74, of the Manor section, told the mayor her taxes went up by $500 a month. “I think that was unconscionable,” she told Torres. “My social security cannot pay the taxes.”

Torres suggested she consider applying for the state’s senior tax freeze program. A city employee jotted down Harris’ information to assist her to enroll into the state program. He also received complaints about unclean streets.

“We don’t have a dirty city; we just have some dirty folks,” said Torres. The city suffers from both dirty “folks” and the municipal government’s failure to clean its streets and properties. For example, a state audit of government owned properties found majority of them neglected and unkempt. In another example, the city failed to sweep many of its roadways last summer after breakdown of street sweepers.

The town hall was attended by twice — 45 people excluding municipal government employees — the number of people from the first gathering. Torres gave his two-hour long presentation with segments covered by various high ranking government officials before opening up the floor for questions and answers. Some residents left the auditorium early due to the length of the presentation.

None of the residents brought up the corruption charges pending against the mayor.

Torres has been charged with theft and other corruption charges for using city employees, who were paid overtime, to renovate a warehouse rented by his daughter and nephew. Torres has pleaded not guilty to the corruption charges. He has been raising money for his legal defense fund. Last week, Torres held a yacht party to raise money for his legal defense. He has not disclosed how much money he raised from the fundraiser. When an investigative reporter from NBC New York questioned him as his guests were boarding the yacht — Cornucopia Majesty – Torres avoided answering questions by holding up a life preserver that had emblazoned on it the “spirit of Paterson.”

At least one council member — Maritza Davila — was seen boarding the yacht. Her vote on the council has aligned with the mayor’s policies and projects. She is hoping to run a re-election campaign next May by touting the mayor’s accomplishments that she supported. Political observes see her chances of holding onto office slim. She was one of the votes against a no confidence measure against the mayor on the council after he was indicted.

Longtime city resident Jan Thomas shouted at Torres calling him a “disgrace” and urging him to resign from office at the first town hall inside the gymnasium of School 27 on Wednesday evening.

“We don’t have trust in you, Joey. We trusted you,” said Thomas at the school in the mayor’s neighborhood.

Torres has announced his intention to run for a fourth term in May of next year. Some of his potential opponents in the upcoming race have described the series of town hall meetings as a political ploy by the mayor with six months to go before the mayoral campaign starts.

The mayor highlighted his various accomplishments over the past three years. In between he took a swipe at the Paterson Times using a disparaging descriptor to issue a mild attack on the hometown newspaper.

Councilman William McKoy, who represents the 3rd Ward, did not attend. Torres said McKoy called him prior to the meeting to tell him the council president was stuck in heavy traffic commuting back from Jersey City.