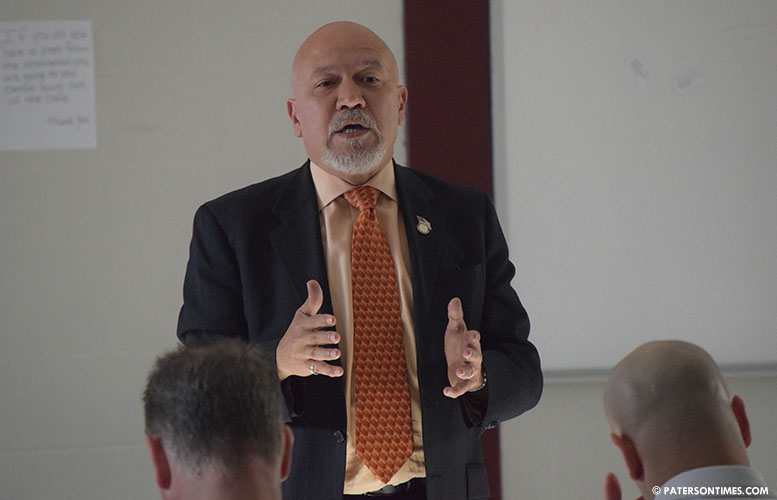 Everyone knows the mayor is going through some personal issues, Torres told the audience of about 15 people, referring to the corruption charges filed against him.

“That is not on the agenda,” Torres told the audience inside the high school’s café. He had an agenda for his meeting displayed on a projection screen. Torres has pleaded not guilty to the corruption charges.

Torres has been loath to recognize the corruption charges against him in the past. For example, the day New Jersey attorney general Christopher Porrino unsealed a six-count indictment against the mayor and three public works supervisors, Torres continued his business as usual at City Hall.

Although some have called for his resignation so he can better focus on addressing his legal troubles, Torres has continued his duties as mayor unimpeded by the corruption charges. His opponents in recent days have said the town hall meetings are just the latest examples of the mayor’s indifference to the serious charges filed against him.

Some of his rivals were even perturbed by the announcement of his series of town hall meetings earlier in the month.

On the agenda at the town hall meeting for the 4th Ward included housing, crime, and various economic development projects in the city. High ranking city officials gave brief presentations on their works in bettering the city in the two-hour long meeting.

Many of those presentations focused on the issues impacting the 4th Ward like crime and housing. Police director Jerry Speziale and deputy chief Heriberto “Eddie” Rodriguez told the attendees crime is down in the city.

“Crime is down. It’s at a 25-year low. However, if you feel unsafe in your homes or your neighborhoods and you feel you have been left unprotected or unsafe then that assumption makes you believe crime is not down. I’m telling you the numbers are there,” said Speziale.

A woman in the audience shook her head and disagreed with the director’s statement that crime is down.

Police data shows crime is at a 25-year low.

Some attendees complained about noise. One man complained about a barbershop on Madison Avenue that he alleged was being used as a front for drugs. Rodriguez and Speziale took down the man’s information to tackle his problem.

There was a question about the pocket park across the street from Bethel AME Church. Pastor Allen Boyer asked when the city would turn its attention to the park in the corner of Governor and Auburn Streets.

Besides crime, housing was the other issue that received a great deal of attention at the meeting. Irma Gorham, director of the Paterson Housing Authority, discussed the new housing projects her agency is pushing.

Gorham talked about the Riverside Terrace that is being demolished to make way for new garden apartments.

Councilwoman Ruby Cotton, who represents the 4th Ward, participated in the meeting.