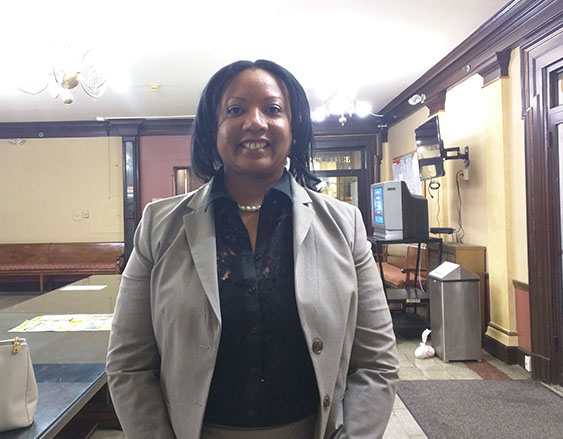 Blakely-Harper (pictured) is a lifelong city resident. She has worked as an assistant corporation counsel in the city’s law department for the past nine years. She worked as a prosecutor at the Paterson Municipal Court during that period.

The term for the five judges already on the bench expires on August 18th, 2017, according to the resolution. Councilmen Michael Jackson and Kenneth Morris suggested breaking up the resolution to separately vote on each judge.

Torres has faced some criticism for removing McDuffie who has been a judge on the court for more than a decade. His move to replace McDuffie with Blakely-Harper led to suggestions the mayor is attempting to divide the African-American community prior to next year’s mayoral election.

Torres has said he is exercising his right to appoint judges and that Blakely-Harper will bring a “fresh perspective to the bench.”

Ruby Cotton, 4th Ward councilwoman, who was not present on Tuesday evening, has expressed concern about the mayor’s move. She said she hopes the African-American community does not become divided as a result of Blakely-Harper’s appointment and McDuffie’s removal.

Council president William McKoy praised McDuffie’s work on the court as did councilman Andre Sayegh. “He was a real testament to us and our community,” said Sayegh.

The council heard from several people who supported Blakely-Harper’s appointment to the court.

“Being an African-American woman, she understands the plight and condition of African-Americans and others who have confronted the judicial system, ” said Kenneth Clayton, pastor at the St. Luke Baptist Church, on Tuesday night. “She loves our city. I think she will serve our city well.”

Clayton is also the president of the local chapter of the National Association for the Advancement of Colored People (NAACP).

The pastor was among two dozen people who came to support Blakely-Harper who grew up at the Riverview Towers. At 15 years of age, Blakely-Harper got a summer job at the Paterson Municipal Court, which helped to change her career outlook and pushed her towards the legal profession, she has previously said.

She obtained her juris doctorate from the Texas Southern University and has her own law practice.

“The city of Paterson owes me nothing,” said Blakely-Harper after she was confirmed in an 8-0 vote by the council. “I just want to be able to serve my city. You owe me absolutely nothing.”

All six appointment and re-appointments are for three-year terms.