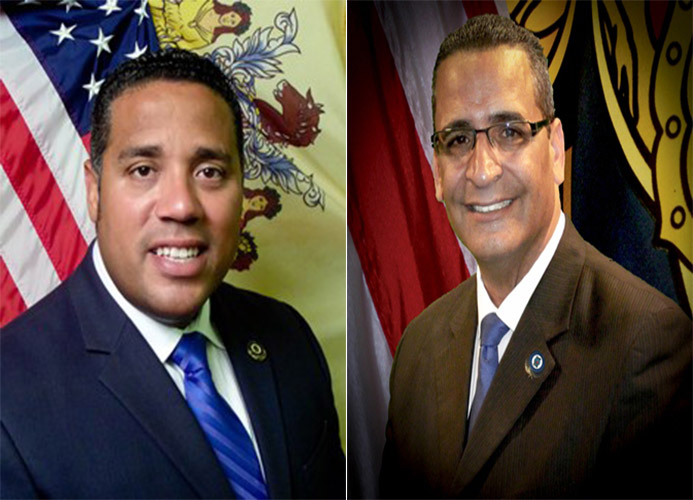 “Mr. Velez is delusional and I am not going to buy into his game,” said Mendez in a text message response. He did not provide an account of the incident.

Velez (pictured, right) said the intense interaction occurred on the third floor of City Hall. He said Mendez was coming out of the council chambers and heading into his office while he, Velez, was passing by after exiting the bathroom.

Mendez allegedly made the threatening remarks in Spanish, said Velez. “I said, ‘Listen, why don’t you say it in English so I can have witnesses here that you’re threatening to f*ck me up and take you to court straightaway.”

The officer approached, but did not intervene, according to Velez.

“The exchange appeared to be agitated,” said Morris. He witnessed the encounter, but did not understand the words that were said in Spanish.

Morris said he did hear Velez tell Mendez to make his remarks in English. Jackson did not hear the words, but noted the encounter between Velez and Mendez was “intense.”

The incident occurred following a long meeting that ended after midnight. In the course of the meeting, Mendez and Velez engaged in vigorous debate. Velez, a vociferous critic of Mendez’s, attacked Mendez throughout the meeting.

“I know he’s frustrated. He was upset. His face was like the devil,” said Velez. “I’m not going to file any charges against him.” He has blasted Mendez over the past week for distributing flyers described as “misleading.”

The ill feelings between Velez and Mendez can be traced back to the May 2016 election when Mendez supported Wendy Guzman in the 5th Ward race. Mendez campaigned hard to prevent Velez from winning the race. The campaign was so bitter, Velez’s campaign headquarter was vandalized during the race.

When asked if is he is concerned for his safety and taking precautions, Velez said, “I’m going to take it as a man. I’m letting it go. He should have a little more respect for his colleagues.”

Council president William McKoy, when told of Velez’s account of the encounter, called interaction between the two men inappropriate. He was not present when the incident occurred.

“We have disagreements from time to time amongst council members. We need to show restraint and respect for others and for their opinions particularly when they differ from our own,” said McKoy, the longest serving member of the council.

The council president said in the heat of the moment feelings get hurt and such exchange can occur. He noted three similar occurrences that have taken place since 2000. He said debates on the council should not turn into personal conflicts outside of the chambers.

McKoy defended Velez for his aggressive inquiries relating to M&T Bank last week that visibly upset Mendez. He said Velez was within his right to raise questions about a flyer that has been described as “misleading.” Mendez distributed the “financial relief workshop” flyer as part of his mayoral campaign for next year.

The workshop was put on by the bank, but the flyer made no mention of M&T Bank. It also was not a financial relief workshop, but a court mandated outreach event to give loans to minority communities that were discriminated against by Hudson City Savings Bank. M&T bought out the Hudson City Savings Bank and is required to comply with the consent order.

Mendez said he left the bank’s name out of the flyer to avoid mixing it with politics.

“I would encourage both parties to be mindful that we live up to a high standard. We have to set a good example for the public and the young people aware of our actions,” said McKoy.