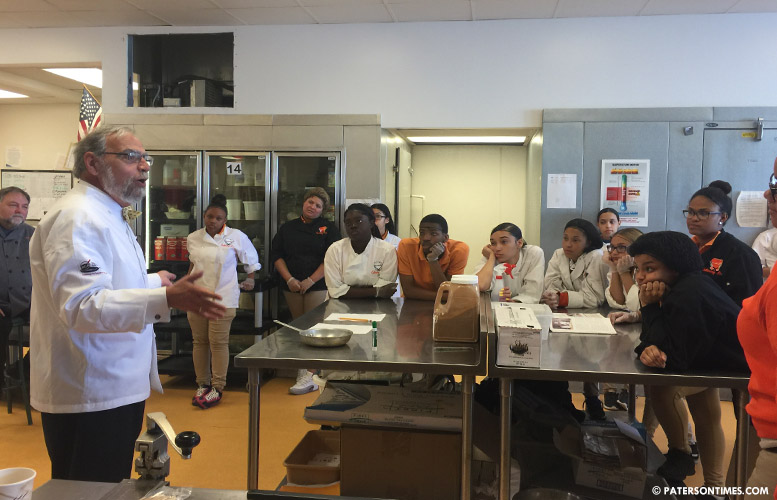 The man in charge of overseeing culinary operations at Paterson-based Kontos Foods visited the School of Culinary Arts, Hospitality, and Tourism at Eastside High School to talk culinary careers with more than three dozen eleventh graders.

Demetrios Haralambatos, corporate executive chef at Kontos Food, a manufacturer and distributor of traditional artisan breads and Mediterranean specialty foods, addressed 40 students. He began by testing the students. He made a list that had headlines: “How to Cut Yourself,” “How to Burn Yourself,” and “How to Destroy Food.” In a light exchange, students pointed out they have learned the opposite in school.

“Ah! You did learn how to become a cook,” Haralambatos told the students. He had the students’ attention with his quirky list. He shared with students the many culinary opportunities that will be available to them upon graduation.

Haralambatos told them working in a restaurant is not their only option. He said hotels, country clubs, hospitals, cruise ships, and school cafeterias abound in culinary opportunities. The opportunities increase even more if a student decides to study culinary arts in higher education.

Haralambatos fielded questions from the inquisitive students and gave them a presentation called “The Evolution of Flatbread; from Ancient Egypt to Today.” Students also were able to taste, smell, feel a variety of flatbreads.

The chef also showed the students how flatbread is cooked on back or bottom of a pan. Kontos Food is famous for its flatbreads.