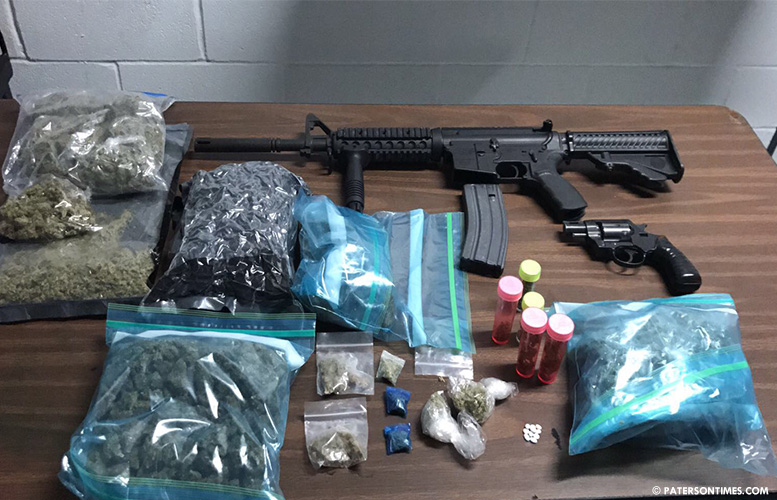 Detectives arrested Niair Lane, 21, of Paterson; Anthony Torres, 18, of Passaic; and Uriel Bartolome, 19, of Paterson in a surveillance operation in the area of Mary and Chadwick streets at around 5 p.m.

Lane was charged with three weapons offenses. He also had outstanding criminal warrants out of Paterson, authorities said.

Torres and Bartolome were each charged with drug possession and distribution charges, authorities said. They were also charged with intent to distribute drugs 1,000 feet of School 8.

Berdnik said drugs seized is valued at $4,000 on the street. The bust began as detectives saw people going in and out of 30 Mary Street. Bartolome and Torres were talking in front of the residence.

Torres had a clear bag containing marijuana, authorities said, that he hid in his groin area of his pants.

Lane was seen coming out of the building holding a draw string bag. Inside the bag was the rifle. All three talked. Lane showed the barrel of a rifle to the other two before closing it.

The three men then departed the area. Detectives stopped Lane and seized the weapons. He suffered scrapes and required treatment at St. Joseph’s Regional Medical Center before being taken to Passaic County Jail.

Bartolome and Torres were stopped trying to board a bus on Main Street. Torres allegedly had 1,200 grams of marijuana. Bartolome had a black backpack that had 1 large vacuum sealed bag and 2 other bags containing marijuana.