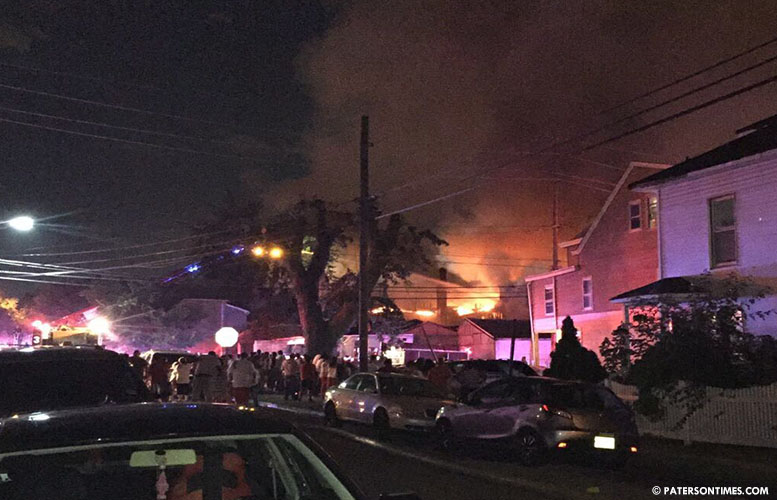 Firefighters were battling two fires in the Riverside and Northside areas of Paterson on Tuesday night.

First blaze was reported at around 9:30 p.m. at an auto body repair lot at 710 River Street. The fire involved multiple vehicles and two storage trailers at the car lot. Fire reached second-alarm and was contained at around 11:39 p.m., said deputy fire chief Pablo Del Valle.

There were no reported injuries, said the deputy chief. The cause of the fire remains under investigation.

The building had numerous attachments, said the deputy chief. The original fire building’s roof collapsed, he said. Firefighters extinguished the main body of fire early Wednesday morning, but had to continue drenching the building.

“We were on the scene to make sure we didn’t have a re-kindle. Because of the building collapse we couldn’t go inside the building,” said Del Valle. Fire was determined to be under control at 9 a.m., he said.

Firefighters had to also extinguish a car fire on River and Lafayette streets that came in at around 10:55 p.m. on Tuesday.

Fire engines from surrounding towns responded to the city to provide mutual aid. A volunteer firefighter from one of the mutual aid companies suffered a minor injury at the North 7th Street incident, said the deputy chief.

Cause of the North 7th Street fire is still under investigation, said the deputy chief.

Passaic County Prosecutor’s Office has been notified of both incidents.