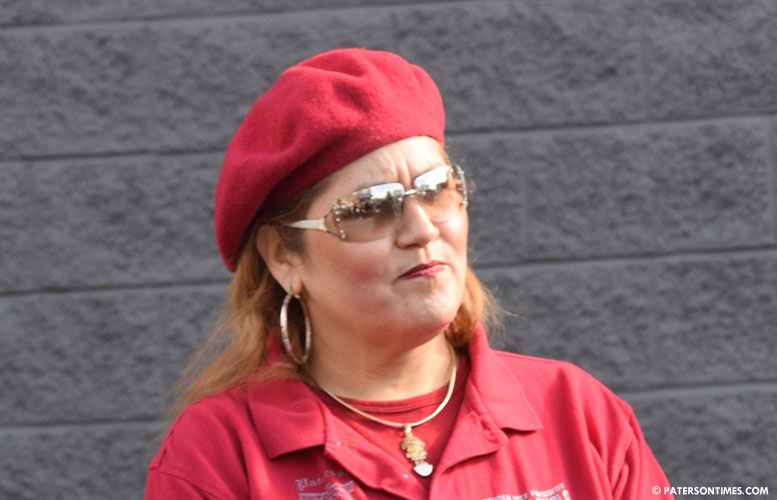 Councilwoman Maritza Davila lashed out at a man who was protesting fees the city imposed on parade organizers at the city council meeting on Tuesday evening.

“I’m tired of you coming here disrespecting me!” shouted an agitated and visibly upset Davila at Lorenzo Rueda, a member of the Peruvian parade group. She alleged the protester accused her of “things that are unjust.” She accused Rueda of being a liar and putting her in a disadvantageous position.

Davila played a key role when mayor Jose “Joey” Torres administration, at the behest of the state government, moved to impose fees on parade organizers. She has been the target of protest since the fees were imposed in May 2015.

“She came to us yelling,” said Rueda outside the historic City Hall building. He was escorted out of the building by police officers. “You as a councilwoman, you’re supposed to listen to us. She don’t represent the people. She represents the interest of money.”

The group that organizes the Peruvian parade has had a tense relationship with Davila over the past two years. The incident between Davila and Rueda was part of a chaotic meeting on Tuesday night.

Mario Lopez, president of the Peruvian Parade, appeared before the council seeking relief from onerous fees his group has to pay the city for clean-up and police cost for putting on a parade every year.

“If we do not receive the $25 million, we will have to raise taxes. We don’t have the liberty to retract. We can’t absorb that cost, not 100-percent,” said Michael Jackson, 1st Ward councilman.

“You’re disrespecting the president!” shouted a woman from the audience. “You’re being disrespectful.”

Cotton tried to restore order. The council chamber was packed with people. Many gathered to either support or oppose a new ordinance regulating business hours for liquor stores.

The council president called for a five-minute recess. The shouting match erupted as Davila was walking down from the dais towards the back exit of the council chamber. The shouting match was witnessed by dozens of people including youngsters who attended the meeting to support the early closing of liquor stores.

Velez was not in the chamber when she apologized to the attendees for the unruly meeting. Davila also apologized.

“I’m good. Don’t poke me the wrong way,” said Davila. She has had a difficult month. Less than two weeks ago, she failed to secure the needed votes to win the council presidency.

Davila is up for re-election in May 2018 and faces the real possibility of losing her seat. Her support has evaporated in the ethnic communities that voted to put her in office three years ago. The parade fees alienated her from the Peruvian community. She is half Peruvian, she said. She has tied herself to the mayor whose political fortune has been on decline since he returned for a third term. Torres, who was indicted on theft and other corruption charges, backed her for the city council presidency. She has said she intends to run on the achievements of the Torres administration.

Torres has pleaded not guilty. His trial is set for September.

Velez later returned to the meeting and apologized to Cotton for disrupting the meeting.

Velez was selected as vice president of the council earlier in the month.

“Tonight did not exemplify what Paterson is about,” remarked Lilisa Mimms, school board member, who was in attendance.