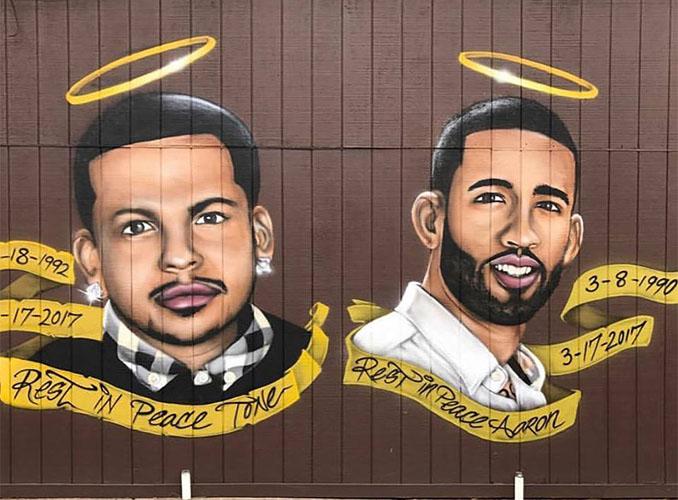 Mayor Jose “Joey” Torres is facing criticism from some residents after the city forced the owner of Westside Grill on Union Avenue to remove the mural of two murder victims — Aaron Anderson and Antonio Vega, Jr. – that graced the side of the popular Hillcrest section eatery.

“I don’t understand why it’s just our mural; why is our mural being targeted?” asked Anderson’s mother Michele Ryerson. “Are all the other murals being taken down?” She said the family secured permission from the building owner prior to putting up the mural on the side of the business in the corner of Union and Preakness Avenues.

“I gave the family permission to put the mural up,” said Gregory Barlikas, owner of Westside Grill. Both victims were customers, he said. He said inspectors from the city visited the location and told him he lacked the proper permits to have the mural.

When Barlikas went to the Community Improvement Division to obtain permits, he was told there’s no such thing as permits for murals. He was told to remove it. He removed the mural and gave it to the families, he said.

“They said murals are not permitted in the city of Paterson,” said Barlikas. The city sees the mural as graffiti, said Ryerson, which violates a municipal ordinance. The owner was issued a summons to appear before a judge at the Paterson Municipal Court on Friday.

“It’s art. It’s a mural. It has peoples’ faces on it,” added Jennifer Jativa, who was friend to both victims. “It was just art. There was nothing bad.”

Jativa said there are murals on Keen Street, Beech Street, and Presidential Boulevard that have gang signs that remain up. The city has been removing similar murals. For example, there was a mural of a murder victim in the vicinity of Park Avenue that was painted over.

The streets Jativa mentioned are all in high crime areas. Graffiti is illegal in the city for a good reason. Studies have shown graffiti creates disorder in neighborhoods that encourage criminal activity. For example, a study conducted by the University of Groningen in the Netherlands, found littering and theft doubles when graffiti is present.

“The City of Paterson is addressing the recent increase of murals and shrines throughout the city. While, the City respects the reasons for these artistic expressions of grief, these are still subject to various City sign and historic district regulations,” Torres said in a statement issued by his office on Thursday morning.

Torres has received angry messages from supporters of the mural. Ryerson said she spoke to the mayor.

Ryerson said the mayor told her the anti-graffiti ordinance has to be revised to allow the family to put up the mural again. This would depend on the city council.

Councilman Shahin Khalique, who represents the 2nd Ward where the building is located, said he knows the family and “will speak to them to address their concerns.” The friends and families of both victims intend to protest before the city council to allow them to re-install the mural at the side of the building.

Torres has asked his staff to review the current laws. He is also seeking to create a mural advisory committee made up of residents, artists, urban planners, and historians.

“In the interim, property owners should continue to be guided by existing Ordinances and NJ State laws,” said Torres.

The mural on the side of the Westside Grill has great emotional significance to the families and friends of victims making the mural issue an extremely sensitive one.

“They were burned so badly that they couldn’t have a real funeral. We couldn’t get them buried. That was the only thing we had. That was the place we visited often,” said Jativa.