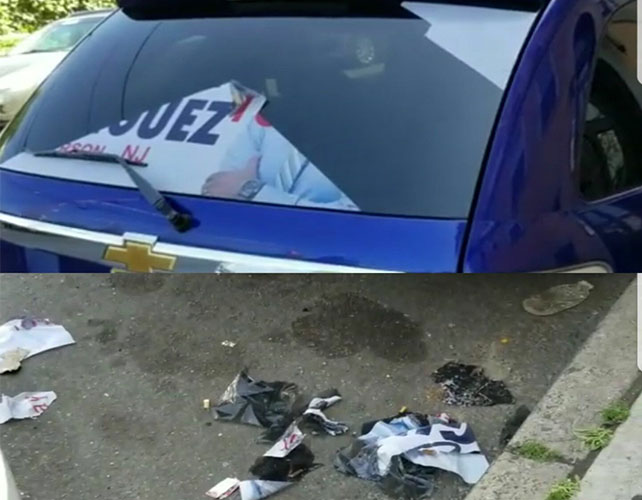 The supporters of mayoral candidate Pedro Rodriguez have been the victims of vandalism over the past week. Five supporters with rear windshield clings promoting the former school board member’s mayoral candidacy found their signs vandalized, said Rodriguez on Monday morning.

“It’s dirty politics. Some people can’t attract supporters so they try to diminish their opponents. It can’t be a random act of somebody walking down the street and taking my signs down,” said Rodriguez. He said vandals destroyed the campaign signs, but did not otherwise damage the vehicles.

The acts of vandalism started on Tuesday of last week and continued into the weekend, he said. He is encouraging supporters to contact police to file reports. When asked who may be behind the vandalism, Rodriguez said:  ”I don’t want to accuse anybody.” His statement from Sunday suggested councilman Alex Mendez’s supporters were behind the vandalism.

When asked whether he believed Mendez’s campaign was targeting his signs, he said, “I’m not directly blaming him. It has to be somebody that’s a very very low-life.” Rodriguez’s campaign is first in the race to use windshield clings that cost more than $100 a piece to promote his candidacy.

Rodriguez said Mendez’s campaign copied his promotional technique. When asked if his campaign was behind the vandalism, Mendez responded: “I’m a thousand percent sure no one that’s supporting Alex Mendez will do something like that. I saw the message. He’s accusing us indirectly. They are trying to blame us.”

Mendez said his campaign had nothing to do with the vandalism. He said Rodriguez’s campaign is attempting to garner sympathy by blaming the vandalism on his campaign. “That’s an old tactic to make people feel sorry for them,” he said. “It’s very irresponsible for them to accuse my campaign.”

Rodriguez claims to have footage of vandalism, said Mendez. Mendez suggested those videos be released to both the public and law enforcement agencies for prosecution. Both men are involved in a struggle to secure the support of the city’s Dominican community which is the largest Hispanic group in Paterson.

Mendez and Rodriguez are of Dominican heritage.

Both Mendez and Rodriguez have declared their candidacy for mayor. Both men have raised funds and both are actively campaigning.

“This is not a Dominican race, this is a Paterson race,” said Rodriguez. Ethnicity matters in Paterson elections where voters cast ballots based on race. The Dominicans are not the only ones divided in this election, so are the African-Americans.

Both Browns are declared candidates in the race.

The Puerto Ricans, whose presence in the city has diminished over the years, will likely be divided between school board member Manny Martinez and indicted mayor Jose “Joey” Torres.