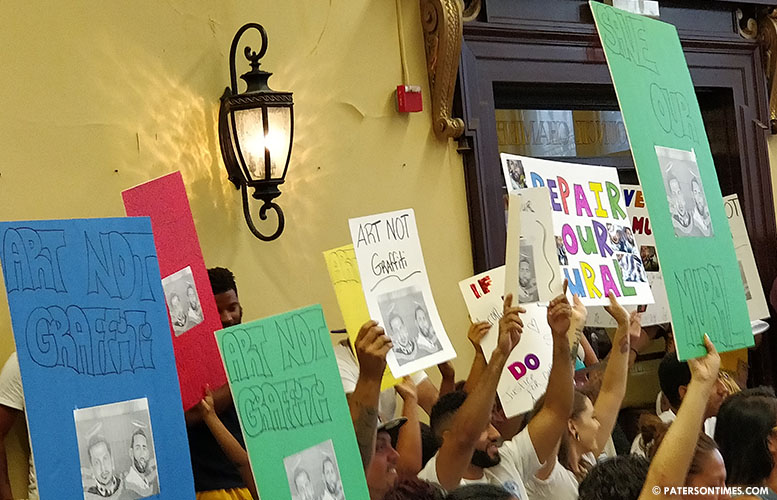 The city’s removal of a mural that paid tribute to two slain men — Aaron Anderson and Antonio Vega, Jr. – sparked a protest on Tuesday evening. Dozens of family members and friends of both men urged municipal officials to restore the mural.

“This mural was targeted for some reason,” Anderson’s father Thurston Anderson told council members. “I ask Paterson: Do the right thing.” The city ordered the removal of the mural that featured the two homicide victims on the Preakness Avenue side of Westside Grill, a popular Hillcrest section eatery.

The city enforced an ordinance that prohibits graffiti. The business owner, who gave permission to the families to put up the mural, received a summons to appear in municipal court. The families and friends of both men began openly blaming mayor Jose “Joey” Torres for the mural removal.

Torres, who lives in the Hillcrest section, announced a mural advisory committee. A resolution before the council seeks to create a seven-member committee whose job will be to “review any requests for the creation of public art and murals.”

Council members were sympathetic to the families.

The mural which was on the side of Westside Grill in the corner of Preakness and Union Avenues.

“I don’t even know why it was removed,” said Shahin Khalique, 2nd Ward councilman. He represents the area where the mural was located.

Stampone claims there’s some ambiguity in the existing ordinance. Under existing ordinance, the mural is prohibited. Graffiti is prohibited for good reasons. Studies have shown graffiti creates disorder in neighborhoods that encourage criminal activity. For example, a study conducted by the University of Groningen in the Netherlands, found littering and theft doubles when graffiti is present.

One person’s graffiti though is another person’s art work. There were signs held up by some of the 50 people who protested the mural removal stating the mural was a work of art and that it was not graffiti.

“The breakdown we’re having now is that the laws on the books don’t allow it in certain instances,” said assistant business administrator Terrence “Terry” Reidy. “The concept here is to encourage public art not discourage it.”

“I know it hurts,” council president Ruby Cotton told the protesters. “Why are we worried about a mural? Mayor, we don’t understand why you did this. There’s so many other issues we need to address. The mural would have been at the bottom of my list.”

Torres was not present at Tuesday’s meeting.

“Memorial murals are not the problem in Paterson. Murder is,” said Andre Sayegh, 6th Ward councilman.

Councilmen Alex Mendez and William McKoy suggested discretion in this matter would have been wiser.

“Not everything is black and white. This is a special situation,” said Mendez, councilman at-large.

“We should always have room for compassion and discretion,” added McKoy, 3rd Ward councilman.

“I can sympathize just being a mother,” said Maritza Davila, councilwoman at-large. Both families were pleased with the outpouring of support from council members.

Vega’s mother Angelina Vega was moved by the support both families received from council members.