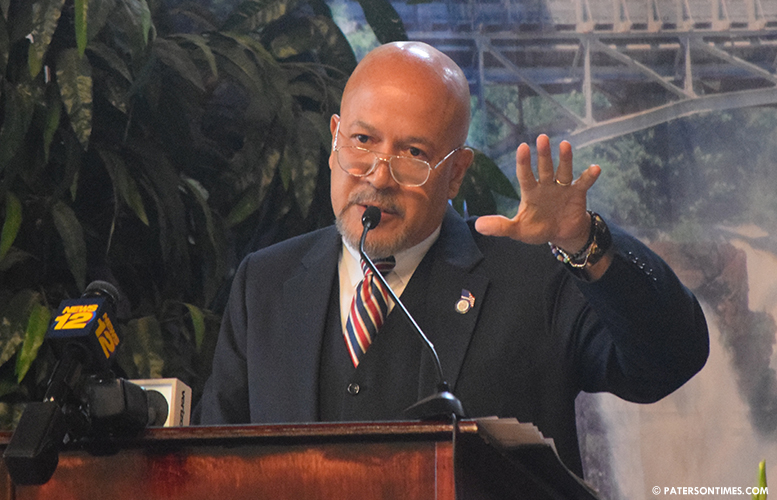 Mayor Jose “Joey” Torres delivered the final state of the city address for his third nonconsecutive term on Tuesday afternoon. His speech was devoid of any major new initiatives or big plans for the city, a marked departure from his previous addresses.

Torres celebrated the accomplishments his administration has made over the past three years. He cited the big reductions in overtime spending. His administration reduced overtime from $5.98 million to $4.3 million in fiscal year 2016, according to a booklet distributed to those who attended this afternoon’s speech. He also touted the reduction in the tax levy over the last two fiscal years. He also said crime at an almost 30-year low.

“We’re making progress,” said Torres. His biggest goal for the third term was resurfacing the city’s primary roadways that has hit a roadblock.

Torres apologized for the delays in resurfacing city streets. He said 20 miles of road have been resurfaced, 10 miles is underway, and 13.5 miles remains. The delays are due to utility work that has to be finished prior to road resurfacing, he said.

Five council members attended the speech. “I didn’t hear anything new,” said council president Ruby Cotton. She and councilwoman Maritza Davila did not expect big proposals or new initiatives in this final state of the city address for the mayor’s third term.

“That’s huge,” said Jackson. Council members have long complained about the “Paterson lip” that residents are often subjected to when dialing their city government.

Cotton said there was talks of implementing such a system in the past.

Torres also said by January city residents will be able to pay their taxes and other bills over the internet. This too was previously talked about, but never came to pass.

The mayor thanked his office staff and other government employees for their service. He concluded by saying a leader has to do the right thing “regardless of environment or mood.” After he was indicted earlier in the year, both the mood and the environment in the city have not been great with some residents calling on him to resign.

Torres is running for re-election in a crowded field of a dozen candidates. He has pleaded not guilty to corruption charges. His trial is expected to start in September.