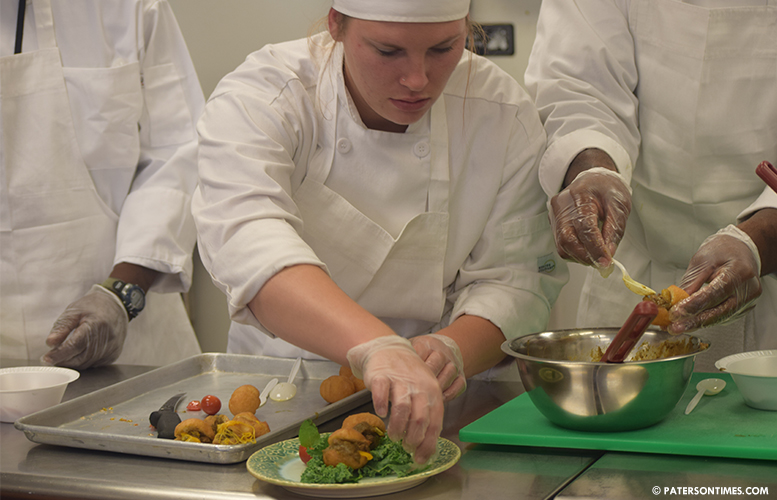 Twenty-seven aspiring chefs at the Eva’s Village Culinary School were given dough balls on Tuesday morning to create their own pastries using an ingredient popular throughout the world.

Broken up into three teams, the students met the challenge. They had an hour to create four dishes – two savory and two desserts – using the pre-baked Greek Loukoumades, a pastry puff, provided by Paterson-based Kontos Foods.

Alan Rodriguez and his team took inspiration from gyro, a Greek meat dish that’s cooked on a vertical rotisserie, to create a lamb puff. It wasn’t easy.

“I had to make that sauce five times. At first, I put too much lemon. So instead of throwing it all out, I had to figure a way to get that lemon taste out of it. I had to add more yogurt and crush garlic, but what really brought it out was the dill,” said Rodriguez.

His team’s dish received high marks from both chef James Cwynar, director of the Culinary School at Eva’s Village, and Demetrios Haralambatos, head chef at Kontos Foods. The two experienced chefs were judges for the first-ever Kontos Foods Cooking Challenge.

“I’m blown away by the level of creativity,” said Haralambatos after trying all the different dishes created by the students. “I didn’t expect them to be at this level.”

Some of the other puffs that stood out for the chefs were the spun-sugar birds, pecan pie, chicken pot-pie, and mango. With so many good dishes that scored high marks, the chefs did not have a clear winner for the contest.

“I got to say these are all good. They all had their unique tastes. Everybody here was really good,” said Cwynar.

Steve Kontos, owner of Kontos Foods, intervened. He agreed to provide all of the participating students with prizes — chef’s jackets.

“A lot of us doubted ourselves,” said Rodriguez, who lives in Paterson but is originally from Perth Amboy. He began working at an IHOP cleaning tables, but was later moved to the grill.

Rodriguez, 31, hopes to work as a top chef at the chain, he said. If he decides to pursue other opportunities he can with the skills he is learning at the school. The school has an above 90-percent placement rate for its students.

“It’s an actual culinary industry job,” said Jacqueline Pierro, student services coordinator at the school, speaking of the sort of jobs students land. The school, which started in 2013, also has a high retention rate. She said the school is gradually expanding by increasing its enrollment.

Rodriguez and the other students started their six months training in culinary arts in June. “I’m learning to cook the right way,” he said. He has learned a great deal from learning to make meats the right way to serving dishes at optimal temperatures, he said.

Similarly, Michael Stewart, 34, of Paterson, said he has learned a great deal over the past two months. “It gives us a lot of courage and hope,” said Stewart, speaking of the praise his team received from the chefs. His team was behind the mango puff.

Using the loukoumades as the main ingredient in the contest worked well for a diverse class. This puff, described as an International Pastry Puff, is known in different cultures by different names. French call them Beignets; Italians call them Zeppole. Variations can also be found in Dutch, Mexican, Japanese, Indian, and the different Muslim cuisines. 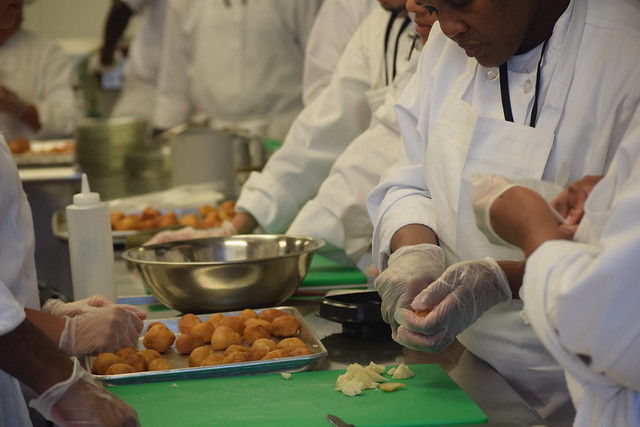 Correction (Aug. 2, 2017): A previous version of this report erroneously stated the school has a 95-percent job placement rate when in fact the placement rate is 92-percent.