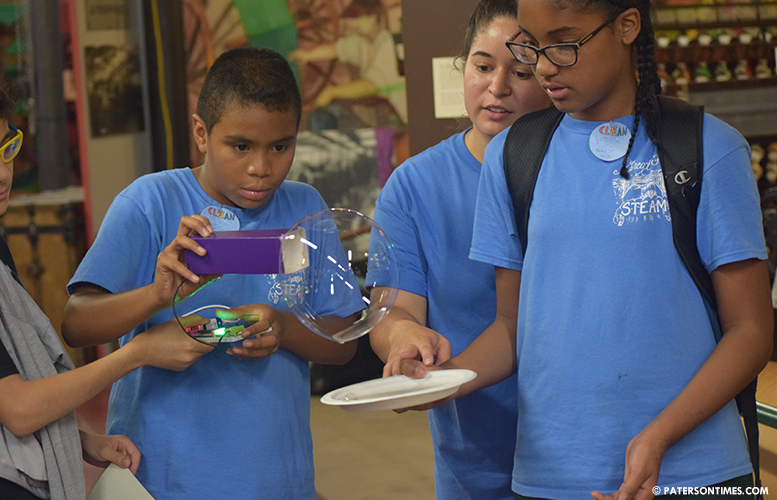 A large bubble formed and popped when Lucas Gasper hit a trigger switch on a circuit board his team programmed. Called the “Clean Bubble Bot,” Gasper’s unmanned vehicle is designed travel in polluted and acidic waterways creating soap bubbles to restore a healthy pH balance in rivers to support aquatic life.

“The water that we have now ruins the ecosystem in the oceans and rivers,” said Gasper’s teammate Nadia Arias, a 5th grader at Paterson Academy for the Gifted and Talented, referring to the badly polluted Passaic River.

Arias would know. She and her team mate – four in all – took water samples from local waterways including the Passaic River to measure acidity levels. They found high levels of nitrate and phosphate in their water samples.

Their “Clean Bubble Bot” also includes a solar-powered street sweeper that should be deployed on urban roadways following a rain storm, said Gasper (pictured producing bubble with machine) and Arias (pictured with backpack). It collects trash and debris, dissolves it, and produces clean energy, they said.

“After it goes all over the streets it would go underwater,” said Samantha Cuevas (pictured behind students), group leader for Arias’s team. The machine would have cameras that would be monitored by people similar to the way drones are operated by the U.S. Army, she said.

The four students used littleBits to build and program their machine as part of the Great Falls Summer STEAM program. Students from nine city schools researched environmental issues related to climate change that are and likely to impact Paterson in the coming years to build their projects.

“This year’s program focused on what do we expect to happen in Paterson due to changes in climate,” said Sarah Sterling-Laldee, supervisor of science at the Paterson Public Schools. “The principal issue we will deal with Paterson is changes to our water supply. We’re going to have too much water in places where we don’t need it and not enough of the kind of water that we do need.”

The students went on a number of field trips to study the Passaic River and the organisms that call it home. There was also independent research the students conducted.

“There was a lot of intense research students did on their own without a lot of adult intervention,” said Sterling-Laldee.

Their research produced nine final projects. Some of the notable projects included a hydrogen-powered vehicle, a submarine that collects trash from waterways and turns it into energy, and a homeless shelter run on hydro-power with robot medics.

Students explained the hydrogen-powered car would take in water and break up the hydrogen and oxygen bond through electrolysis to power the vehicle.

The 40 students, who participated in the program, presented their final projects to district officials and community organizations at the Paterson Museum on Thursday morning. Their presentations were sprinkled with scientific terms that were clearly acquired through research and helped to precisely explain their projects.

“I was really impressed,” said Sterling-Laldee of the projects and the presentations.

In the course of the four weeks, students learned to design things using a special software for 3D Printing, learned to use MIT App Inventor that’s used to create apps for iPhone and Android devices, and took art classes, said Sterling-Laldee.

The summer program has been around for nine years.